Alexander: The Sands of Ammon (Paperback) 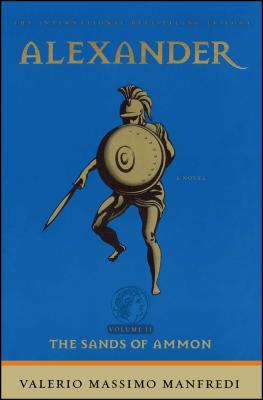 This is book number 2 in the Alexander series.

THE BESTSELLING EPIC OF THE GLORY AND THE GRANDEUR INTRIGUES AND PASSIONS OF ANCIENT GREECE...AND THE WARRIOR KING WHOSE CONQUESTS BUILT AN ETERNAL LEGEND.

A thousand years after Agamemnon fought the Trojan War. Alexander, the king of Macedonia and descendant of Achilles, follows in the footsteps of Greek legend. He has gathered a mighty force to liberate the Greek cities of Asia -- from legendary Sardis and Miletus to Halicarnassus. But vengeance is just one of Alexander's ambitions.

Great oracles and loyal followers claim Alexander is more than mortal -- a powerful warrior, and insatiable scholar, a political genius. Yet,in battle after battle, one man blocks his way. Memnon of Rhodes, a Greek-born mercenary chosen by the Persian Great King to lead his vast army, is a cunning strategist who challenged Alexander's claim to the title of Lord of Asia. In Memnon, Alexander confronts an enemy who inspires his admiration. And in Memnon's wife, Barsine, he finds a woman who captures his heart. But neither bravery nor love can stem the tide of Alexander's destiny. For with Persia defeated, Alexander's thoughts turn to Egypt and beyond...

Dr. Valerio Massimo Manfredi is an Italian historian, archaeologist, and journalist. The professor of archaeology in the "Luigi Bocconi" University in Milan and a familiar face on European television, he has published a number of scientific articles and essays as well as thirteen novels, including the Alexander trilogy and The Last Legion. Alexander was published in thirty-six languages in fifty-five countries and was sold for a major film production in the U.S., and The Last Legion is soon to be a major motion picture starring Colin Firth and Ben Kingsley. Dr. Manfredi is married with two children and lives in a small town near Bologna.