Tampering with Tradition: The Unrealized Authority of Democratic Agency (New Directions in Culture and Governance) (Hardcover) 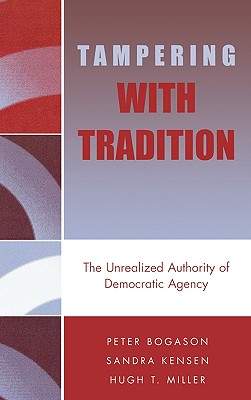 Scholars of politics are comfortable theorizing about the parliamentary process and individual political parties, but they are often guilty of ignoring the role of individual citizens except through opinion polls and voting statistics. Even at the local level, the main focus of political theorists has traditionally been on formal systems of government-usually lauding representative democracy as the standard for Western government-while the importance of participatory action at a local level has been vastly underestimated. Correcting this imbalance, the renowned political scholars who contribute to this volume outline both the theory and practice of so-called "extra-formal democracy," wherein societal governance is more accurately described as a "network activity" and citizens, politicians, public administrators and other professionals act together on issues or problems that are defined as public. This new and complex form of democracy-explored here in three unique settings: the United States, the Netherlands, and Denmark-is increasingly regarded as an achievable vision for a multi-faceted theory of government.