Impossible Views of the World (Hardcover) 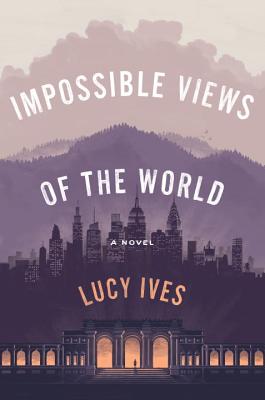 A witty, urbane, and sometimes shocking debut novel, set in a hallowed New York museum, in which a co-worker's disappearance and a mysterious map change a life forever


Stella Krakus, a curator at Manhattan's renowned Central Museum of Art, is having the roughest week in approximately ever. Her soon-to-be ex-husband (the perfectly awful Whit Ghiscolmbe) is stalking her, a workplace romance with "a fascinating, hyper-rational narcissist" is in freefall, and a beloved colleague, Paul, has gone missing. Strange things are afoot: CeMArt's current exhibit is sponsored by a Belgian multinational that wants to take over the world's water supply, she unwittingly stars in a viral video that's making the rounds, and her mother--the imperious, impossibly glamorous Caro--wants to have lunch. It's almost more than she can overanalyze.

But the appearance of a mysterious map, depicting a 19th-century utopian settlement, sends Stella--a dogged expert in American graphics and fluidomanie (don't ask)--on an all-consuming research mission. As she teases out the links between a haunting poem, several unusual novels, a counterfeiting scheme, and one of the museum's colorful early benefactors, she discovers the unbearable secret that Paul's been keeping, and charts a course out of the chaos of her own life. Pulsing with neurotic humor and dagger-sharp prose, Impossible Views of the World is a dazzling debut novel about how to make it through your early thirties with your brain and heart intact.

Lucy Ives is the author of several books of poetry and short prose, including The Hermit and the novella nineties. Her writing has appeared in Artforum, Lapham’s Quarterly, and at newyorker.com. For five years she was an editor with the online magazine Triple Canopy. A graduate of Harvard and the Iowa Writers’ Workshop, she holds a Ph.D. in comparative literature from New York University. She teaches at the Pratt Institute and is currently editing a collection of writings by the artist Madeline Gins.

“[An] intricate, darkly funny debut…There is so much going on in this novel, so many sharp observations packed into sentences as sensual and jarring as a Mardi Gras parade, that it bears a second look…Ives, an accomplished poet, infuses even mundane actions with startling imagery…Read this book on whichever level you choose: you woman coming unglued, art world mystery or museum-based episode of ‘The Office,’ replete with petty workplace drama, aged PCs and the occasional colleague marching ‘up and down the hall, loudly, in quest of a staple remover.’ It’s a smart novel brimming with ideas about love, art, personal agency, a lack thereof.” —The New York Times Book Review

“It’s rare to find both a page-turner and a thoughtful take on labor, art institutions, and personal agency in one text, but Ives not only pulls it off but makes it look effortless. I wish everything I picked up was as smart and funny and human as this novel.” — Catapult

“I first knew Lucy Ives's work as a poet, and to have her prose is a gift, too. The detailed novel she's built with such authenticity, wit, and feeling is remarkable for its vitality, insights, and lyrical view of a changing world.” —Hilton Als, Pulitzer Prize-winning author of White Girls

“This book was written by a rampaging, mirthful genius. It stands before me like a runestone, magical, mysterious—an esoteric juggernaut masquerading as a 'debut novel.' During the days I spent reading it, I said goodbye to all else." —Elizabeth McKenzie, author of The Portable Veblen

“Cool and bracing…a perfect summer pleasure…An accomplished poet, Ives also knows how to delight sentence by sentence, with turns of phrase that cry to be underlined or Tweeted…Part send-up of the Manhattan art world, part elaborate literary mystery, the novel is bound together by a voice that is at turns deadpan and warm, shot through with a crisp irony that makes it tempting to declare it the literary equivalent of an Alex Katz painting…It’s a singular work, worthy of a place in any world-class collection.” —Vogue.com

“Diehard Da Vinci Code fans will find a new heroine in Stella, the code-cracking art curator at the center of this clever mystery.” —Cosmopolitan

“An art historical mystery that will interest fans of Donna Tartt's The Goldfinch, with a narrator equal parts intellectual, ironic, and cool…Scintillating…A diversion and a pleasure, this novel leaves you feeling smarter and hipper than you were before.” —Kirkus Reviews (starred)

“An original debut ringing with smart prose, engaging humor and cultivated taste…Ives’ genius is apparent in the intricate way she weaves ironic confession, romantic comedy and artful treatise with explorations into the historic art world…Full of intelligence and imagination, this relatable literary mystery will charm even the most apprentice art devotee.” —BookPage

“Stella is like Hannah Horvath from Girls—smart, with an equal tendency toward snark and introspection—living in From the Mixed-Up Files of Mrs. Basil E. Frankweiler. The novel sends up the museum world, with pretentious art folks courting corporate dollars and the usual office politics, but maintains a sense of something larger, even magical, working in the background.”
—Booklist

“The charm and energy of Impossible Views of the World rest in Ives’s uncanny eye for the subtle tells of romance, the idiosyncrasies of the NYC young, and the details of 19th-century furniture and art…A clever curatorial mystery, a love-gone-wrong rom-com or a sharp-witted story of a young New York woman, Impossible Views of the World is way more fun than a rainy afternoon in the American Objects wing of a cavernous museum.” —Shelf Awareness

“[A] smart and singular debut novel…Ives maximizes her story’s humor with subtlety; a line here and there is enough to call attention to the absurdity of, for instance, the museum’s corporate benefactor’s attempt to secure the world’s water rights. She also isn’t afraid to make her heroine unlikable, which works in the novel’s favor…odd and thoroughly satisfying.” — Publishers Weekly

"There are abundant pleasures to be found in Lucy Ives’s debut novel about art curation, corporate control, and utopia (among many other subjects and digressions), but the best is the poetic, elegant intelligence of its narration, vocalized by Stella Krakus, whose every sentence wryly climbs from the ridiculous to the sublime."  —Teddy Wayne, author of Loner and The Love Song of Jonny Valentine

“Lucy Ives, a deeply smart and painstakingly elegant writer, wins the prize with this intricate, droll, stylish book—at once a mystery novel, a romantic comedy, a tricky essay on aesthetics, an exposé of art-world foibles, and a diary of emotional distress.  With sharp phrases, uncanny plot-turns, and mise-en-abymes galore, this mesmerizing tale radiates the haute irreality of Last Year at Marienbad and the dreamy claustrophobia of The Mixed-Up Files of Mrs. Basil E. Frankweiler, this time for adults only.” —Wayne Koestenbaum, author of My 1980s and Other Essays