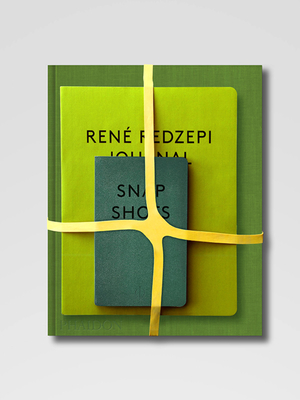 By René Redzepi
$71.45
NOT on our shelves now. Usually ships from warehouse in several days.

Winner of the 2014 James Beard Award for Photography

In 2010, Chef René Redzepi published Noma: Time and Place in Nordic Cuisine, hailed by The Wall Street Journal as "the most important cookbook of the year." Since then, Redzepi has become one of the world’s most influential chefs, with his famed restaurant Noma claiming the number one spot at the World’s 50 Best Restaurants Awards four times.

Now Rezepi has created a fascinating and innovative new three–book collection: A Work in Progress: Journal, Recipes and Snapshots. It includes a personal journal written by Rene himself over a full year in which he explores creativity, innovation, and the meaning and challenges of success; a beautiful cookbook with 100 brand new recipes from Noma; and a pocket book of candid Instagram–style snapshots taken by the restaurant staff behind the scenes and at its annual MAD Food Symposium.

The cookbook is organized in a calendar year format with each month featuring an assortment of seasonal dishes, such as Icy Sloe Berries and Brown Cheese Ganache; Trash Cooking with Leeks; Oxtail and Blueberries; Fresh Tender Squid and Whitecurrent Broth; and Spicy and Sweet Cucumber and Pickled Elderflowers. The book also features an introduction from the Denmark–born Lars Ulrich of Metallica.

A Work in Progress offers an unprecedented and honest look inside the mind of a chef who is at the top of today’s international gastronomic scene. Reflective, insightful, and compelling, Redzepi’s trailblazing new book is sure to be of interest to food lovers and general readers alike.

René Redzepi is one of the most influential chefs on the international gastronomic scene. He is head chef and majority owner of the 2–star Michelin restaurant Noma in Copenhagen, which specializes in Nordic cuisine and sources ingredients exclusively from Scandinavia. Classically trained, Redzepi began his culinary career at Copenhagen’s Restaurant Pierre André, eventually moving onto El Bulli, The French Laundry, and Kong Hans Koelder. He founded Noma in 2003 and since then, the restaurant has taken the number one spot in the World’s 50 Best Restaurant Awards in 2010, 2011, and 2012. In 2008, Redzepi established the Nordic Food Lab, a non–profit institution established to explore Nordic cuisine. He also participates annually in MAD Food Camp, a platform that engages leading chefs, scientists, and academics each summer to discuss a new theme.

Redzepi’s first major cookbook, Noma: Time and Place in Nordic Cuisine (Phaidon, 2010) was hailed by The Wall Street Journal as "the most important cookbook of the year" and won both IACP and James Beard awards.

"René Redzepi is, without a doubt, the most influential, provocative, and important chef in the world. . . This book chronicles a year in the life of a chef, a creative process – and a restaurant considered by many to be the best." – Anthony Bourdain

"Redzepi has given us a book – or really, three books – that take us not only into the field. . . but also into the wildest place of all: his mind. A striking, thought–provoking, and imminently pleasurable read." – Daniel Barber

"This is a brilliant, honest, and ultimately exhilarating insight into one of the most important culinary minds in the world." – Daniel Patterson

" . . . a raw, fascinating and innovative exploration of an elite chef’s obsessive life. But more than that, it is a book about creativity." – The San Francisco Chronicle

" . . . [A Work in Progress] forms an intimate look at what Redzepi does, how he does it, and what it means to do it. . . What fun to delve into this landscape of Nordic ingredients and ideas. You just might find yourself dreaming about eating hay and ants for dinner and spruce parfait for dessert." – Food & Wine

"Unique and insightful, this is one collection true food lovers will delight in." – Publishers Weekly

" . . . the best portrait yet of the intellectual and emotional challenges of delivering one of the most creative menus in the business." – The Economist

" [A Work in Progress] gets our pick for the best cookbook of the year because it’s human, intimate and inspiring." – Tasting Table