Twelve Caesars: Images of Power from the Ancient World to the Modern (Hardcover) 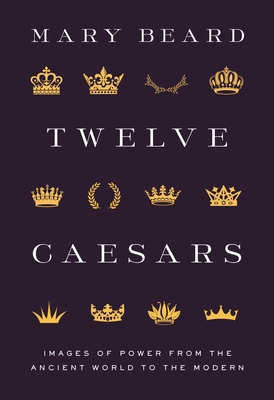 From the bestselling author of SPQR: A History of Ancient Rome, the fascinating story of how images of Roman autocrats have influenced art, culture, and the representation of power for more than 2,000 years

What does the face of power look like? Who gets commemorated in art and why? And how do we react to statues of politicians we deplore? In this book--against a background of today's "sculpture wars"--Mary Beard tells the story of how for more than two millennia portraits of the rich, powerful, and famous in the western world have been shaped by the image of Roman emperors, especially the "Twelve Caesars," from the ruthless Julius Caesar to the fly-torturing Domitian. Twelve Caesars asks why these murderous autocrats have loomed so large in art from antiquity and the Renaissance to today, when hapless leaders are still caricatured as Neros fiddling while Rome burns. Beginning with the importance of imperial portraits in Roman politics, this richly illustrated book offers a tour through 2,000 years of art and cultural history, presenting a fresh look at works by artists from Memling and Mantegna to the nineteenth-century American sculptor Edmonia Lewis, as well as by generations of weavers, cabinetmakers, silversmiths, printers, and ceramicists. Rather than a story of a simple repetition of stable, blandly conservative images of imperial men and women, Twelve Caesars is an unexpected tale of changing identities, clueless or deliberate misidentifications, fakes, and often ambivalent representations of authority. From Beard's reconstruction of Titian's extraordinary lost Room of the Emperors to her reinterpretation of Henry VIII's famous Caesarian tapestries, Twelve Caesars includes fascinating detective work and offers a gripping story of some of the most challenging and disturbing portraits of power ever created. Published in association with the Center for Advanced Study in the Visual Arts, National Gallery of Art, Washington, DC

Mary Beard is one of the world's leading classicists and cultural commentators. A specialist in Roman history and art, she is professor of classics at the University of Cambridge and the author of bestselling and award-winning books, including SPQR: A History of Ancient Rome and Women and Power: A Manifesto. She has also written and presented many television programs, from Civilisations and Meet the Romans to The Shock of the Nude. She lives in Cambridge, England. Twitter @wmarybeard