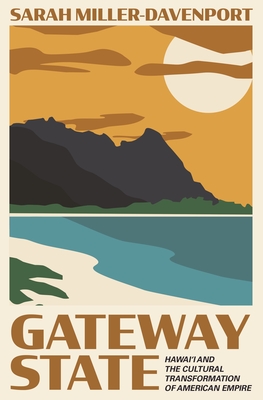 By Sarah Miller-Davenport
$35.00
ON HAND in at least ONE of our stores. Click through or call for up-to-the-minute availability.

Gateway State explores the development of Hawai'i as a model for liberal multiculturalism and a tool of American global power in the era of decolonization. The establishment of Hawai'i statehood in 1959 was a watershed moment, not only in the ways Americans defined their nation's role on the international stage but also in the ways they understood the problems of social difference at home. Hawai'i's remarkable transition from territory to state heralded the emergence of postwar multiculturalism, which was a response both to independence movements abroad and to the limits of civil rights in the United States. Once a racially problematic overseas colony, by the 1960s, Hawai'i had come to symbolize John F. Kennedy's New Frontier. This was a more inclusive idea of who counted as American at home and what areas of the world were considered to be within the U.S. sphere of influence. Statehood advocates argued that Hawai'i and its majority Asian population could serve as a bridge to Cold War Asia--and as a global showcase of American democracy and racial harmony. In the aftermath of statehood, business leaders and policymakers worked to institutionalize and sell this ideal by capitalizing on Hawai'i's diversity. Asian Americans in Hawai'i never lost a perceived connection to Asia. Instead, their ethnic difference became a marketable resource to help other Americans navigate a decolonizing world. As excitement over statehood dimmed, the utopian vision of Hawai'i fell apart, revealing how racial inequality and U.S. imperialism continued to shape the fiftieth state--and igniting a backlash against the islands' white-dominated institutions.

Sarah Miller-Davenport is lecturer in U.S. history at the University of Sheffield.