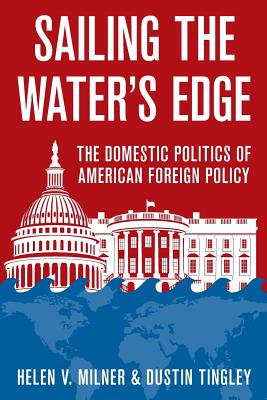 By Helen V. Milner, Dustin Tingley
$37.73
NOT on our shelves now. Usually ships from warehouse in several days.

When engaging with other countries, the U.S. government has a number of different policy instruments at its disposal, including foreign aid, international trade, and the use of military force. But what determines which policies are chosen? Does the United States rely too much on the use of military power and coercion in its foreign policies? Sailing the Water's Edge focuses on how domestic U.S. politics--in particular the interactions between the president, Congress, interest groups, bureaucratic institutions, and the public--have influenced foreign policy choices since World War II and shows why presidents have more control over some policy instruments than others. Presidential power matters and it varies systematically across policy instruments. Helen Milner and Dustin Tingley consider how Congress and interest groups have substantial material interests in and ideological divisions around certain issues and that these factors constrain presidents from applying specific tools. As a result, presidents select instruments that they have more control over, such as use of the military. This militarization of U.S. foreign policy raises concerns about the nature of American engagement, substitution among policy tools, and the future of U.S. foreign policy. Milner and Tingley explore whether American foreign policy will remain guided by a grand strategy of liberal internationalism, what affects American foreign policy successes and failures, and the role of U.S. intelligence collection in shaping foreign policy. The authors support their arguments with rigorous theorizing, quantitative analysis, and focused case studies, such as U.S. foreign policy in Sub-Saharan Africa across two presidential administrations. Sailing the Water's Edge examines the importance of domestic political coalitions and institutions on the formation of American foreign policy.

Helen V. Milner is the B.C. Forbes Professor of Politics and International Affairs at Princeton University. Her books include Votes, Vetoes, and the Political Economy of International Trade Agreements and Interests, Institutions, and Information (both Princeton). Dustin Tingley is professor of government at Harvard University.