Four Arguments for the Elimination of Television (Paperback) 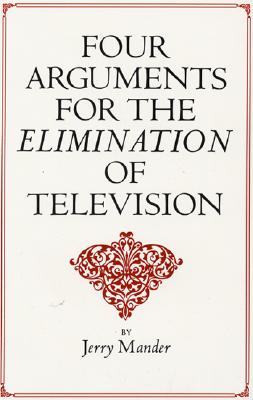 A total departure from previous writing about television, this book is the first ever to advocate that the medium is not reformable. Its problems are inherent in the technology itself and are so dangerous -- to personal health and sanity, to the environment, and to democratic processes -- that TV ought to be eliminated forever.

Weaving personal experiences through meticulous research, the author ranges widely over aspects of television that have rarely been examined and never before joined together, allowing an entirely new, frightening image to emerge. The idea that all technologies are "neutral," benign instruments that can be used well or badly, is thrown open to profound doubt. Speaking of TV reform is, in the words of the author, "as absurd as speaking of the reform of a technology such as guns."

Jerry Mander holds B.S. and M.S. degrees in Economics, spent 15 years in the advertising business, including five as president and partner of Freeman, Mander & Gossage, San Francisco, one of the most celebrated agencies in the country. After quitting commercial advertising, he achieved national fame for his public service campaigns, leading the Wall Street Journal to call him "the Ralph Nader of adevertising." In 1972 he founded the country's first non-profit ad agency, taking leave of that in 1974. Mander is co-author of The Great International Paper Airplane Book.