The Wasp Factory: A Novel (Paperback) 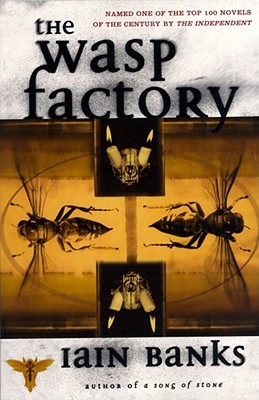 The polarizing literary debut by Scottish author Ian Banks, The Wasp Factory is the bizarre, imaginative, disturbing, and darkly comic look into the mind of a child psychopath.

Two years after I killed Blyth I murdered my young brother Paul, for quite different and more fundamental reasons than I'd disposed of Blyth, and then a year after that I did for my young cousin Esmerelda, more or less on a whim.

That's my score to date. Three. I haven't killed anybody for years, and don't intend to ever again.

It was just a stage I was going through.

Iain Banks came to widespread and controversial public notice with the original publication of his first novel, The Wasp Factory, recently selected in a British poll as one of the top 100 novels of the century. Since then he has gained enormous popular and critical acclaim with further works of fiction and, as Iain M. Banks, science fiction. He lives in Scotland.

The Independent One of the top 100 novels of the century.

Mail on Sunday A mighty imagination has arrived on the scene.

The Financial Times Macabre, bizarre, and impossible to put down.

The Scotsman There's nothing to force you, having been warned, to read it; nor do I recommend it.

Punch The Wasp Factory is a first novel not only of tremendous promise, but also of achievement, a minor masterpiece perhaps.

Times Literary Supplement A literary equivalent of the nastiest brand of juvenile delinquency.

Daily Express Read it if you dare.