Among the Thugs (Vintage Departures) (Paperback) 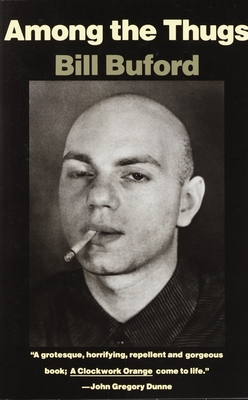 They have names like Barmy Bernie, Daft Donald, and Steamin' Sammy. They like lager (in huge quantities), the Queen, football clubs (especially Manchester United), and themselves. Their dislike encompasses the rest of the known universe, and England's soccer thugs express it in ways that range from mere vandalism to riots that terrorize entire cities. Now Bill Buford, editor of the prestigious journal Granta, enters this alternate society and records both its savageries and its sinister allure with the social imagination of a George Orwell and the raw personal engagement of a Hunter Thompson.

Bill Buford is a staff writer and the European correspondent for The New Yorker. He was the fiction editor of the magazine for eight years, from April 1995 to December 2002. Before that Bill edited Granta magazine for 16 years and, in 1989, became the publisher of Granta Books. He has edited three anthologies: The Best of Granta Travel, The Best of Granta Reportage, and The Granta Book of the Family. Bill is also the author of Among the Thugs, a highly personal nonfiction account of crowd violence and British soccer hooliganism.

"An important, perhaps prophetic, book ... both exciting and sad at the core.... [Buford is] a superbly talented reporter." —The New York Times Book Review

"Brilliant ... one of the most unnerving books you will ever read." —Newsweek

Like Michael Herr or Ryszard Kapuscinski, Buford has witnessed events which can only be compared in intensity to those of a war ... an unflinching look into the festering soul of England ... a fuckin' great read." —David Byrne

Animated, witty, and so pungent you can taste the stale lager." —Washington Post Book World