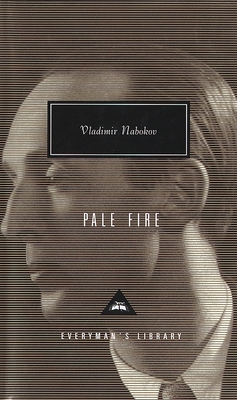 The urbane authority that Vladimir Nabokov brought to every word he ever wrote, and the ironic amusement he cultivated in response to being uprooted and politically exiled twice in his life, never found fuller expression than in Pale Fire published in 1962 after the critical and popular success of Lolita had made him an international literary figure.

An ingeniously constructed parody of detective fiction and learned commentary, Pale Fire offers a cornucopia of deceptive pleasures, at the center of which is a 999-line poem written by the literary genius John Shade just before his death. Surrounding the poem is a foreword and commentary by the demented scholar Charles Kinbote, who interweaves adoring literary analysis with the fantastical tale of an assassin from the land of Zembla in pursuit of a deposed king. Brilliantly constructed and wildly inventive, this darkly witty novel of suspense, literary one-upmanship, and political intrigue achieves that rarest of things in literature–perfect tragicomic balance. With an introduction by Richard Rorty.

Vladimir Vladimirovich Nabokov was born on April 23, 1899, in St. Petersburg, Russia. The Nabokovs were known for their high culture and commitment to public service, and the elder Nabokov was an outspoken opponent of antisemitism and one of the leaders of the opposition party, the Kadets. In 1919, following the Bolshevik revolution, he took his family into exile. Four years later he was shot and killed at a political rally in Berlin while trying to shield the speaker from right-wing assassins.

The Nabokov household was trilingual, and as a child Nabokov was already reading Wells, Poe, Browning, Keats, Flaubert, Verlaine, Rimbaud, Tolstoy, and Chekhov, alongside the popular entertainments of Sir Arthur Conan Doyle and Jules Verne. As a young man, he studied Slavic and romance languages at Trinity College, Cambridge, taking his honors degree in 1922. For the next eighteen years he lived in Berlin and Paris, writing prolifically in Russian under the pseudonym Sirin and supporting himself through translations, lessons in English and tennis, and by composing the first crossword puzzles in Russian. In 1925 he married Vera Slonim, with whom he had one child, a son, Dmitri.

Having already fled Russia and Germany, Nabokov became a refugee once more in 1940, when he was forced to leave France for the United States. There he taught at Wellesley, Harvard, and Cornell. He also gave up writing in Russian and began composing fiction in English. In his afterword to Lolita he claimed: "My private tragedy, which cannot, and indeed should not, be anybody's concern, is that I had to abandon my natural idiom, my untrammeled, rich, and infinitely docile Russian tongue for a second-rate brand of English, devoid of any of those apparatuses–the baffling mirror, the black velvet backdrop, the implied associations and traditions–which the native illusionist, frac-tails flying, can magically use to transcend the heritage in his own way." [p. 317] Yet Nabokov's American period saw the creation of what are arguably his greatest works, Bend Sinister (1947), Lolita (1955), Pnin (1957), and Pale Fire (1962), as well as the translation of his earlier Russian novels into English. He also undertook English translations of works by Lermontov and Pushkin and wrote several books of criticism. Vladimir Nabokov died in Montreux, Switzerland, in 1977.

"This centaur-work, half poem, half prose…is a creation of perfect beauty, symmetry, strangeness, originality and moral truth. Pretending to be a curio, it cannot disguise the fact that it is one of the great works of art of this century." —Mary McCarthy, The New Republic

"As a literary tour de force it surpasses anything else Mr. Nabokov has done." —Atlantic Monthly

"Scintillating, brilliantly inventive…[Pale Fire] has almost as many layers of meaning as an artichoke has petals." —Commonwealth

"Of all [Nabokov's] inventions, Pale Fire is the wildest, the funniest and the most earnest. It is like nothing on God's earth." —New York Herald Tribune

"Nabokov writes prose the only way it should be written, that is, ecstatically." —John Updike