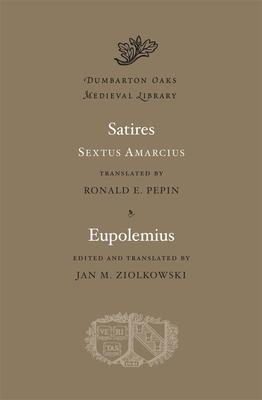 By Sextus Amarcius, Ronald E. Pepin (Translator), Jan M. Ziolkowski (Translator)
$35.00
ON HAND in at least ONE of our stores. Click through or call for up-to-the-minute availability.

Composed in Germany by a monastic poet steeped in classical lore and letters, the Satires of Amarcius (Sextus Amarcius Gallus Piosistratus) unrelentingly attack both secular vices and ecclesiastical abuses of the late eleventh century. The verses echo Horace and Prudentius, are laced with proverbs and polemic, and portray vividly aspects of contemporary life--the foppery of young nobles, the vainglory of the nouveaux riches, the fastidiousness of debauched gluttons. This is the first English translation of the Satires.

The Eupolemius is a late-eleventh-century Latin epic that recasts salvation history, from Lucifer's fall through Christ's resurrection. The poem fuses Greek and Hebrew components within a uniquely medieval framework. At once biblical, heroic, and allegorical, it complements the so-called Bible epics in Latin from late antiquity and the refashionings of biblical narrative in Old English verse. It emulates classical Latin epics by Virgil, Lucan, and Statius and responds creatively to the foundational personification allegory by the Christian poet Prudentius. The poem was composed by an anonymous German monk, possibly the author who used the pseudonym Amarcius. Although it focuses on events of both the Hebrew Bible and New Testament, it is also rooted in its own momentous times.