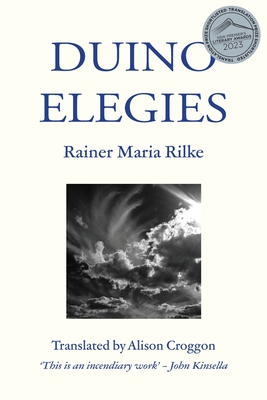 Rainer Maria Rilke (1875-1926) is one of Germany's major Modernist poets, notable for the lyric intensity of his work. He considered the Duino Elegies - a cycle of ten poems written in inspirational bursts between 1912 and 1922 - to be his major achievement. The restless movement of these poems reflects his lifelong struggle to reconcile the dichotomies of joy and suffering, life and death, masculine and feminine, that ruled his life. They remain powerful testaments to Rilke's struggles with the mysteries of existence and the endlessly opening miracle of the everyday.

Alison Croggon's radical new translation captures the energies of the German poems with an urgent, acute clarity. As she says in her introductory essay: 'The turbulent currents that make the Elegies so enthralling are generated by the dynamic contradictions of a mind acutely conscious of its own movements.... The poems are not "about" life: rather, they are a startling mimesis of its instability and transience.'

'Alison Croggon's transformative and impassioned translation of Rilke's Duino Elegies attempt the extraordinary... Signature, regret, pain, trauma, wonder, euphoria, wonder, rapture and an immersion in the senses are all contained in the crispness and experiential sensibility that guides Croggon's relationship with the original poems. Croggon lives in the wild beauty of these elegies and makes them glow in translation... This is an incendiary work.' - John Kinsella

Printed en face with the German text and with an afterword and notes by the translator. Preface by John Kinsella.

'Alison Croggon is one of the most powerful lyric poets writing today.' - Australian Book Review