Bad Guys in the Furball Strikes Back (Prebound) 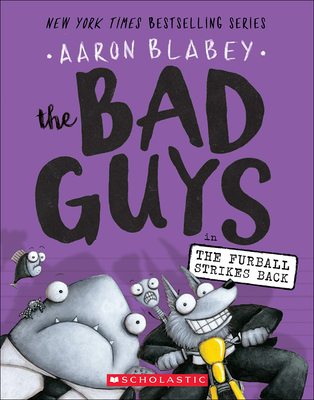 By Aaron Blabey
$16.80
NOT on our shelves now. Usually ships from warehouse in several days.
(This book cannot be returned nor exchanged.)

This is book number 3 in the Bad Guys series.

The Bad Guys are about to have a very BAD day
Mr. Wolf and his bad buddies have messed with the wrong guinea pig--one who is secretly an evil mad scientist. And the nasty little furball wants revenge Will they survive? Will they be heroes? And will they ever stop trying to eat each other? ?
It's time for the Bad Guys to spring into action

Aaron Blabey was an actor before he started creating children's books. In 2008, Pearl Barley and Charlie Parsley was awarded Children's Book Council of Australia's Book of the Year. In 2012, The Ghost of Miss Annabel Spoon was named a White Raven by the International Youth Library, Munich, Germany. It also won the Patricia Wrightson Prize in the 2013 New South Wales Premier's Literary Awards, and the Children's Peace Literature Award, 2013. And now The Bad Guys has won Australia's Children's Indie Book Award for 2016! Aaron lives with his two children and his wife in Sydney, Australia.