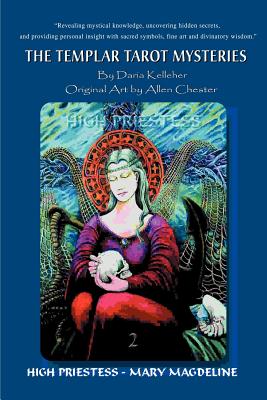 By Daria V. Kelleher
$17.95
NOT on our shelves now. Usually ships from warehouse in several days.

The Templar Tarot Mysteries is not your usual Tarot card book. It collects for the reader the various theories about the Knights Templar as they apply to the symbols in the Templar Tarot deck. This information will give the tools necessary for seeing the Tarot for what it is: a series of closely held spiritual lessons hidden during a time of persecution.

It is the belief of the author that no one person, or group invented the Tarot or was responsible for the spread of the cards. Many people, some unwittingly, left their imprint in the cards or changed them in unforeseen ways.

The book includes a series of fictional tales and parables linked to the Major Arcana cards. They show the various complex worlds that touched and influenced the Tarot.

The name 'Tarot' may not have been attached to the collection of pictorial cards when the concept was first initiated. No one even knows with certainty where the name comes from. By delving deeper into the art depicted on the cards the reader can uncover his or her own truth or path to enlightenment.

It is not the destination that matters, it is the journey.