The Every: A novel (Paperback) 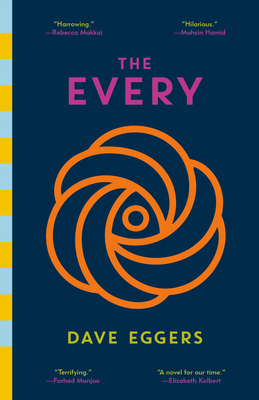 From the award-winning, bestselling author of The Circle comes an exciting new follow-up. When the world’s largest search engine/social media company, the Circle, merges with the planet’s dominant ecommerce site, it creates the richest and most dangerous—and, oddly enough, most beloved—monopoly ever known: the Every.

Delaney Wells is an unlikely new hire at the Every. A former forest ranger and unwavering tech skeptic, she charms her way into an entry-level job with one goal in mind: to take down the company from within. With her compatriot, the not-at-all-ambitious Wes Makazian, they look for the Every's weaknesses, hoping to free humanity from all-encompassing surveillance and the emoji-driven infantilization of the species. But does anyone want what Delaney is fighting to save? Does humanity truly want to be free?

Studded with unforgettable characters, outrageous outfits, and lacerating set-pieces, this companion to The Circle blends absurdity and terror, satire and suspense, while keeping the reader in apprehensive excitement about the fate of the company—and the human animal.

DAVE EGGERS is the author of many books, among them The Circle—the companion to the book you are holding—and also The Monk of Mokha, A Hologram for the King, What Is the What, and The Museum of Rain. He is the cofounder of 826 National, a network of youth writing centers, and Voice of Witness, an oral history book series that illuminates the stories of those impacted by human rights crises. He has been a finalist for the Pulitzer Prize, the National Book Award, and the National Book Critics Circle Award, and is the recipient of the Dayton Literary Peace Prize and the American Book Award. He has attended the JetPack Aviation academy in Moorpark, California, but is not yet certified to fly off-tether. Born in Boston and raised in Illinois, he has now lived in the San Francisco Bay Area for three decades. He and his family often consider leaving, but they do not leave.

“Once a decade a book like The Every advances the frontier of literary excellence: a book that reflects our culture. Predicts our future. Worm-holes into our subconscious. Delivers artful and complex characters, metaphor, ideas, narrative. Provides percussive movements of levity, gravity, grace, suspense, hilarity.”—Kerri Arsenault, The Boston Globe

“(A) great-grandchild of Zamyatin’s We, but now the 'perfect society' is Silicon Valley. Be careful what you wish for!”—Margaret Atwood, via Twitter

“Eggers is a wonderful storyteller with an alert and defiant vision. His down-home decency means he pulls short of articulating a thought that recurred for me throughout reading The Every: threatened with spiritual extinction through conformism, sanitization, shame, inanity and surveillance, it might yet be our evil, our perversity, our psychopathology, our hate that prove the saving of us.”—Rob Doyle, The Guardian

“Fiction like Eggers’s can show how socially destructive technology is normalized. . . . His exquisite portrayal of how this dynamic builds over time complements scholarly descriptions. . . . Eggers reveals something most of us can’t perceive in real time when we start using a new gadget promoted by a Big Tech company: the big picture and the likely endgame.”—Evan Selinger, Los Angeles Review of Books

“Corporate autocracy is explored through satire, social criticism, and emotion, to evoke ideas Eggers considers terrifying, funny and ludicrous. . . . The Every captures our time, the world around us, and the lives within it.”—Michael Silverblatt, KCRW

“One has to admire Eggers’ belief in the power of fiction to make a difference, and his determination to use his publishing company to make a difference while remaining modestly pragmatic by necessity. The Every is smart, funny and very sharply pointed. If it doesn’t hit on every aspect of the diffused totalitarianism of the tech companies and the way smartphones, cameras and computers have negatively impacted humanity, it sure hits on many of them.”—Eric Ackland, Pittsburgh Post-Gazette

“[This is a] remarkable piece of satire, riven as it is with horribly plausible ideas and horribly good jokes. It’s one thing to sound a warning about how we are on a slippery slope to a kind of consumerist fascism where we exchange liberty for convenience. What Eggers does so well is make the Every alluring as well as alarming. . . . Eight years after The Circle was published, there is all too little that rings false about its predictions about social media. If the same is true of The Every, we are in even more trouble than we thought we were.”―The Times

“A darkly hilarious narrative that doesn’t just hit close to home. It burns the home down and then coldly assassinates all insurance adjusters who arrive on the scene to offer redemption.”—Eric Mack, CNET

“A prescient—and hilarious—meditation on the rise of tech giants and how our blind trust in them could ultimately be our demise.”—Harper’s Bazaar

“What a perfect summation of our growing fears about Big Tech . . . cleverly speculating on the dystopia we’d face if these firms joined forces.”—Alison Beard, Harvard Business Review

“Dave Eggers is one of my favorite people to talk to about everything. I hugely admire Dave—his novels, the plotting, the diction, his slyness, his intellectual generosity. The Every is a terrific book.”—Virginia Heffernan, This is Critical

“Each matter-of-fact aside about how life has evolved from our present day into this book's near future is a comedic dystopian gem Don Delillo could love.”—Nathan Matisse, Ars Technica

“[The Every] . . . sparkles with provocative ideas.”—Publishers Weekly

“Some of the sharpest satire about our tech-obsessed world.”—Kara Swisher, Sway

“Hilarious and horrifying and idealistic. An unusual combination in a novel, or in anything else, really, but here the necessary result of a powerful writer taking on much of what matters most to our future.”—Mohsin Hamid, author of Exit West

“The novel’s perspective on Big Tech may strike some people as excessively dire, but it comes from a place of genuine concern: Eggers is careful to limit the intrusion of technology into his own life. . . . And it’s also worth reading the book precisely because it lays out the worst-case scenario of technology that caters to the public’s growing taste for self-optimization, convenience, and a life without guilt.”—Sarah Todd, Quartz

“The novel follows two employees of The Every who try to dismantle the company from the inside. In order to do some of his own dismantling, Eggers has MacGyvered a unique distribution strategy so that pub-date hardcover copies of his book will be exclusively available through independent booksellers.”—The Millions

“Eggers takes his probing social criticism-via-the-novel approach to the all pervasive world of social media, as we follow the deeply tech-averse Delaney Wells’ attempt to take down the eponymous surveillance corporation from within. Extra plaudits to Eggers for making the difficult IRL decision to not sell his new book in hardcover on Amazon (it will be available only at independent bookstores).”—Lit Hub

“The Every follows through not only on the world Dave Eggers created in The Circle, but on the absurd and alarming world we've created for ourselves. With oracular precision, he takes us on a journey equal parts terrifying and human and hilarious. This is Eggers at the top of his game.”—Rebecca Makkai, Pulitzer Prize finalist for The Great Believers

“Unforgettable. With brilliant humor and enormous suspense, The Every examines how technology is indelibly redefining what it means to be human, and how it already has.”—Van Jones, CNN contributor and author of Beyond the Messy Truth

“I don’t know what’s more frightening: Dave Eggers’s relentlessly inventive worldbuilding of a pseudo-virtuous surveillance economy run monopolistically amok, or that his near-future dystopian satire may be a more naturalistic rendering of our present than we’d like to admit. Novels like The Every—equal parts comic entertainment and ominous explication—are one of our best means of resisting the dehumanizing seductions all around us and imagining a better world.”—Teddy Wayne, author of Apartment

“If you haven’t read Dave Eggers, you should. If you have, you won’t need persuading to read his latest. It’s that simple.”—Kwame Anthony Appiah, author of The Lies That Bind: Rethinking Identity

“The Every is a brilliant exploration of the American obsession with efficiency that will also make you laugh until you cry. With a unique eye for the absurd, Eggers ultimately illuminates how human beings cannot be reduced to algorithms unless we allow ourselves to be. Dazzling and essential.”—Allison Stanger, Leng Professor of International Politics and Economics, Middlebury College

“At once sharply satirical and big-hearted, darkly comic and profoundly serious, The Every is a novel for our time.”—Elizabeth Kolbert, New Yorker staff writer and author of Under a White Sky

“Eggers proposes an uncanny world, on the border between the impossible-to-imagine and the already-in-play. Every reader is implicated. We are all members of that passive army willing to trade freedom for convenience. As digital culture blossomed, people wondered if machines could be made to think like people. The more compelling question is the one Eggers poses in The Every: Are people content to become machines?”—Sherry Turkle, author of The Empathy Diaries

“Many will say The Every offers a prophecy of tech-abetted dystopia, but that’s both too dour and too hopeful a way to describe Dave Eggers’s remarkable sequel to The Circle. Too dour because you’ll be hard pressed to find a more hysterical account of digital madness. Yet too hopeful because the true horror here is how closely Eggers hews to our daily reality of tech-dependence, and how often The Every feels more like documentary than dystopia — a hilarious, harrowing look not at a disturbing future but an inescapable present.”—Farhad Manjoo, New York Times opinion columnist and author of True Enough: Learning to Live in a Post-Fact Society

“For a book that is often hilarious, and always a page-turner, this is an awfully uncomfortable read, and it stays with you afterward, lingering and surfacing every time you brush up against the technology in your life.”—Cory Doctorow, author of Attack Surface

“True to its title, The Every manages to be all the things at once: funny and frightening; engaging and disturbing; true and uncanny. It pulls off the impossible trick of depicting a future that’s already now. Above all, it’s a propulsive story I couldn’t put down, and it stayed with me long after I read it.”—Jennifer Traig, author of Devil in the Details: Scenes from an Obsessive Girlhood

“The Every is wonderful, profound, tragic, dystopian, scary, inspiring, and also extremely funny.”—Andrew Keen, author of How to Fix the Future

“If Mae Holland introduced readers to the credulity of evil, Delaney Wells, protagonist of The Every, shows us instead the possibility—and limits—of resistance in our age of techno-utopianism. Will she Yes-Man her way to revolution or apocalypse? Eggers’s darkly resonant and blisteringly funny new opus is a satire about the limits of irony. It asks: Are we building a reprehensible world from ideas that seem, on the surface, virtuous?”—Virginia Eubanks, author of Automating Inequality

“The Every belongs in the pantheon of dystopias. Eggers has conjured a tech-shrouded future that’s both exaggerated and troublingly believable. Through Eggers’s lens, it’s not impossible to imagine a world in which we’re under constant surveillance, forced to return to screens and wearables every few minutes, and in which privacy and individuality are almost entirely eradicated. Eggers’s characteristic attention to detail and humor are on full display, which makes it impossible not to enjoy reading The Every despite the darkness of his vision.”—Adam Alter, author of Irresistible

“In this thoroughly entertaining new book, Dave Eggers takes every opportunity to work out the worst possible scenario of the worst possible ideas that the world of tech has offered or might offer, both at the personal and cultural levels. If there’s a half-baked bad predictive model floating around the Silicon Valley ether, prepare to see it fully baked and served with a heaping side of shame. And it’s funny, too!”—Cathy O’Neil, author of Weapons of Math Destruction: How Big Data Increases Inequality and Threatens Democracy