The Chiffon Trenches: A Memoir (Paperback) 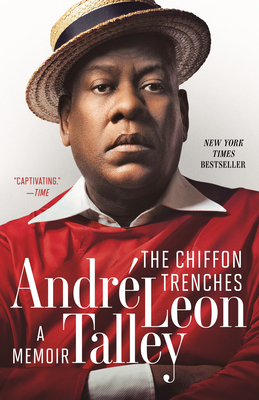 NEW YORK TIMES BESTSELLER • From the pages of Vogue to the runways of Paris, this “captivating” (Time) memoir by a legendary style icon captures the fashion world from the inside out, in its most glamorous and most cutthroat moments.

During André Leon Talley’s first magazine job, alongside Andy Warhol at Interview, a fateful meeting with Karl Lagerfeld began a decades-long friendship with the enigmatic, often caustic designer. Propelled into the upper echelons by his knowledge and adoration of fashion, André moved to Paris as bureau chief of John Fairchild’s Women’s Wear Daily, befriending fashion's most important designers (Halston, Yves Saint Laurent, Oscar de la Renta). But as André made friends, he also made enemies. A racially tinged encounter with a member of the house of Yves Saint Laurent sent him back to New York and into the offices of Vogue under Grace Mirabella.

There, he eventually became creative director, developing an unlikely but intimate friendship with Anna Wintour. As she rose to the top of Vogue’s masthead, André also ascended, and soon became the most influential man in fashion.

The Chiffon Trenches offers a candid look at the who’s who of the last fifty years of fashion. At once ruthless and empathetic, this engaging memoir tells with raw honesty the story of how André not only survived the brutal style landscape but thrived—despite racism, illicit rumors, and all the other challenges of this notoriously cutthroat industry—to become one of the most renowned voices and faces in fashion.

Woven throughout the book are also André’s own personal struggles that impacted him over the decades, along with intimate stories of those he turned to for inspiration (Diana Vreeland, Diane von Fürstenberg, Lee Radziwill, to name a few), and of course his Southern roots and faith, which guided him since childhood.

The result is a highly compelling read that captures the essence of a world few of us will ever have real access to, but one that we all want to know oh so much more about.

André Leon Talley was the indomitable creative director at Vogue during the magazine’s rising dominance as the world’s fashion bible. Over the course of five decades, his byline also appeared in Vanity Fair, HG, Interview, and Women’s Wear Daily. He was the author of two memoirs, The Chiffon Trenches and A.L.T., and several illustrated works, including Little Black Dress, A.L.T.: 365+, and Oscar de la Renta: His Legendary World of Style. André was also the subject of the documentary The Gospel According to André. For his significant contributions to the arts, he was granted France’s distinguished honor of Chevalier de l’Ordre des Arts et des Lettres (Knight of the Order of Arts and Letters). He received his MA in French studies from Brown and served on the board of trustees for the Savannah College of Art and Design for twenty years. André Leon Talley died in 2022.

“The joy of reading about André Leon Talley’s journey in The Chiffon Trenches is coupled with knowing that he survived and thrived by being revered and respected by those at every level of fashion. That never goes out of style.”—Tamron Hall, award-winning journalist and host of Tamron Hall

“André Leon Talley’s fantastic memoir, The Chiffon Trenches, is a riveting, enthralling, and heartbreaking read, tracing the incredible arc of his life from growing up in the Jim Crow South to what it took for him to come to New York and, thanks to his vast talent and work ethic, gain the respect and recognition of the legends of his day, including Diana Vreeland, Andy Warhol, Karl Lagerfeld, and Anna Wintour. André has lived life at the epicenter of the most glamourous worlds of fashion in both Paris and New York; and now this book is one more chapter in his amazing legacy.”—Wendy Goodman, design editor of New York

“André Leon Talley is the preeminent fashion historian of his generation. His rare quality of mind and the depth of his knowledge infuse The Chiffon Trenches with a spirited voice, keen sensibility, and cultural intellect. The poly-sonic narrative incorporates histories of styles and collections; reveals fashion politics imbued with racism, power plays, fears, and ignorance; and describes with compelling honesty the impact of these forces on his black body.”—Dr. Janis A. Mayes, African/Diasporan Francophone Studies, Syracuse University

“The Chiffon Trenches chronicles the remarkable life of trailblazing fashion icon André Leon Talley as he breaks new ground in an industry rife with racism, prejudice, and bias. An honest, candid memoir full of vulnerable and authentic reflections on some of the most historic fashion moments of the twentieth century. A diorama of fashion royalty populates this intelligent memoir by an inimitable legend.”—Darren Walker, president of the Ford Foundation

“I literally could not stop reading The Chiffon Trenches—I started reading in the afternoon and finished the same evening. Everyone in the fashion world will be reading this book—whether they admit it or not.”—Dr. Valerie Steele, director and chief curator of the Museum at the Fashion Institute of Technology

“André Leon Talley has transcended the fashion industry by showing each of us how he has tamed his own genius to become a one-of-a-kind unique leader. Read this book if you want to be entertained, educated, enlightened, and most of all taught how to step out of the crowd to become your own true and authentic self.”—Marc Benioff, chairman and owner of Time

“Talley’s unrivaled knowledge, extraordinary eye for spotting raw talent, and ‘ahead of the curve’ ability to clearly define what makes a good dress draws you in from page one. An insightful and intelligent read, conveyed in a way only he could.”—Manolo Blahnik