The Defender: How the Legendary Black Newspaper Changed America (Hardcover) 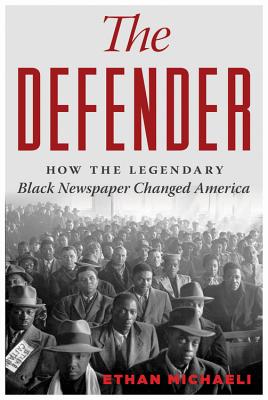 Giving voice to the voiceless, the Chicago Defender condemned Jim Crow, catalyzed the Great Migration, and focused the electoral power of black America. Robert S. Abbott founded The Defender in 1905, smuggled hundreds of thousands of copies into the most isolated communities in the segregated South, and was dubbed a "Modern Moses," becoming one of the first black millionaires in the process. His successor wielded the newspaper’s clout to elect mayors and presidents, including Harry S. Truman and John F. Kennedy, who would have lost in 1960 if not for TheDefender’s support. Along the way, its pages were filled with columns by legends like Ida B. Wells, Langston Hughes, and Martin Luther King.

Drawing on dozens of interviews and extensive archival research, Ethan Michaeli constructs a revelatory narrative of race in America and brings to life the reporters who braved lynch mobs and policemen’s clubs to do their jobs, from the age of Teddy Roosevelt to the age of Barack Obama.

ETHAN MICHAELI is an award-winning author, publisher, and journalist based in Chicago. He was a copy editor and investigative reporter at The Defender from 1991 to 1996.

"Conscientiously researched and fluent, The Defender is essentially a record of the African-American struggle in our times.” –Wall Street Journal

"Ethan Michaeli’s epic, meticulously detailed account not only reminds its readers that newspapers matter, but so do black lives, past and present." –USA Today

“This prodigiously researched work is a testament to the courage of Defender writers through the century, a chronicle of the influence of an important institution -- and a sweeping history of black America.” –National Book Review

“A fascinating account of the legendary black newspaper that spoke truth to power, fought for equality and made history.” –Minneapolis Star Tribune

"A sprawling, well-researched panoramic with surprisingly fluid prose." –In These Times

“This is history at its best -- engagingly written, meticulously researched, and infused with fascinating characters and vivid scenes. Ethan Michaeli tells an important American story, and tells it with style and remarkable attention to detail.”–Dean Jobb, author of Empire of Deception, writing for the judges of the Chicago Writers Association, from whom The Defender received the 2016 Award for Non-Fiction (Traditionally Published)

“Ethan Michaeli's The Defender is a rich, majestic, sweeping history, both of a newspaper and of a people. In these pages, Michaeli captures the degradation and exhilaration of black America in the twentieth century, and driving this story are a handful of men and women infused with incredible courage and a deep faith in journalism's power to seek justice.”
—Alex Kotlowitz, author of There Are No Children Here.

“In the spring of 1905 Robert Abbott sat at a card table squeezed into a corner of a realtor’s office on Chicago’s South Side to put together the first issue of a newspaper he called The Defender. In the 110 years since it has more than lived up to its name, its pages filled with searing reports of racial injustice and fierce editorials in support of its readers’ rights.  Now Ethan Michaeli has recreated The Defender’s remarkable history—and reminded us of the power of the press at its courageous best.”
—Kevin Boyle, author of the National Book Award-winning Arc of Justice: A Saga of Race, Civil Rights and Murder in the Jazz Age

“This is a major work of American history—the compelling and richly-researched story of the legendary newspaper and the astonishing collection of history-makers whose lives are forever intertwined.”
—Jonathan Alter, author of The Center Holds: Obama and his Enemies

“Here, at long last, is the story that needed to be told.  In The Defender, Ethan Michaeli has laid out the power and importance of a fearless newspaper in the struggle for black equality. Meticulously researched, engagingly written, Michaeli's landmark history of this storied institution, which has served at key moments as lens, interpreter, catalyst or voice for blacks’ full citizenship rights, will become an essential resource in African American cultural and political studies.”
—Carol Anderson, Professor of African American Studies at Emory University, author of White Rage

“The story of the Chicago Defender is one of the great untold stories of black America − if not the great story. At every crucial juncture, from the northern migration, to Pullman strikes to civil rights right up to Barack Obama, the Defender was there chronicling, advocating and building an entire civic, political and intellectual universe. It is remarkable to me that this book wasn’t written until now and an absolute god-send that Ethan Michaeli has stepped in to fill the void.”
—Chris Hayes, author of Twilight of the Elites, host of MSNBC’s “All In with Chris Hayes.”

“Ethan Michaeli’s compelling book represents social history at its finest. The Defender explores America’s long struggle with race through the unique lens of an essential and underappreciated Chicago newspaper at the center of it all.”
—David Maraniss, author of Once in a Great City: A Detroit Story“For more than a century, the South Side of Chicago has been a hub of African-American history, and throughout the years, that saga has been told through the pages of the Chicago Defender newspaper.  In this compelling book, Ethan Michaeli shares the story of the Defender and the essential role it has played in Chicago's black community and beyond.”—David Axelrod, author of Believer: My Forty Years in Politics

"With meticulous attention to detail and in immensely readable prose, Ethan Michaeli, who once worked for the paper, tells The Chicago Defender's story and, through it, that of African Americans in the twentieth century. It is a masterful work that goes a long way toward explaining why we are where we are now."
—Jessica B.Harris, Professor of English, Queens College/ CUNY and author of High on the Hog: A Culinary Journey From Africa to America

“Just as the Defender has broken important journalistic ground time and again in its' storied history, author Ethan Michaeli is an original and intrepid force in Chicago media, having devoted his life to elevating and celebrating the silenced voices of Chicago's public housing projects. Michaeli on the Defender is an unbeatable combination.”
—Dave Isay, founder of StoryCorps, author of Listening is an Act of Love

“The Defender is the kind of superb nonfiction you don’t see much anymore—a big, fluidly written, marvelously researched story about fascinating people who shaped American culture. Ethan Michaeli has written a book that is as important as it is compulsively readable.”
—Jonathan Eig, author of The Birth of the Pill