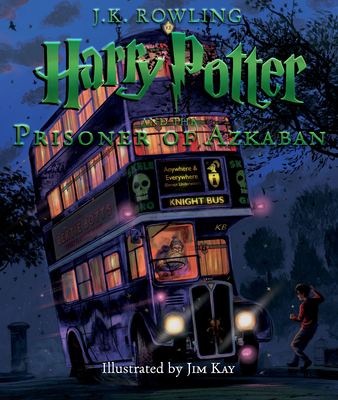 By J.K. Rowling, Jim Kay (Illustrator)
$39.99
ON HAND in at least ONE of our stores. Click through or call for up-to-the-minute availability.

This is book number 3 in the Harry Potter series.

For twelve long years, the dread fortress of Azkaban held an infamous prisoner named Sirius Black. Convicted of killing thirteen people with a single curse, he was said to be the heir apparent to the Dark Lord, Voldemort.

Now he has escaped, leaving only two clues as to where he might be headed: Harry Potter's defeat of You-Know-Who was Black's downfall as well. And the Azkaban guards heard Black muttering in his sleep, "He's at Hogwarts . . . he's at Hogwarts."

Harry Potter isn't safe, not even within the walls of his magical school, surrounded by his friends. Because on top of it all, there may well be a traitor in their midst.

J.K. Rowling is the author of the seven Harry Potter novels, which have sold over 450 million copies and have been translated into 79 languages, and three companion books originally published for charity. She has also written The Casual Vacancy, a novel for adults, and, under the pseudonym Robert Galbraith, is the author of the Cormoran Strike crime series. In 2016 J.K. Rowling made her screenwriting debut and was a producer on the film Fantastic Beasts and Where to Find Them, a further extension of the Wizarding World and the start of a new five-film series.

Jim Kay won the Kate Greenaway Medal in 2012 for his illustrations in A Monster Calls by Patrick Ness. Jim studied illustration at the University of Westminster and since graduating has worked in the archives of Tate Britain and the Royal Botanic Gardens at Kew. Jim has produced concept work for television and contributed to a group exhibition at the Victoria and Albert Museum in London. He now lives and works in Northamptonshire, England, with his partner and a rescued greyhound.

"I love seeing Jim Kay's interpretation of Harry Potter's world, and I feel honored and grateful that he continues to lend his talent to it." -- J.K. Rowling

"It's all that an old-fashioned book aficionado could wish for . . . Is this, one wonders, the sort of book found at Diagon Alley's Flourish and Blotts or in the Hogwarts library? Kay's illustrations, freshly re-envisioning the story, range from spot images to dramatic double page spreads, all pulsating with color and vitality. This gorgeous volume is sure to please all, from Harry Potter neophytes to longtime fans." -- New York Times Book Review