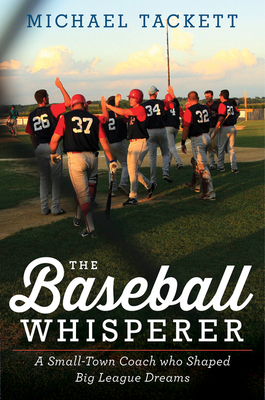 From an award-winning journalist, a real Field of Dreams story about a legendary coach and the professional-caliber baseball program he built in America's heartland, where boys come summer after summer to be molded into ballplayers—and men

Clarinda, Iowa, population 5,000, sits two hours from anything. There, between the corn fields and hog yards, is a ball field with a bronze bust of a man named Merl Eberly, a baseball whisperer who specialized in second chances and lost causes. The statue was a gift from one of Merl’s original long-shot projects, a skinny kid from the ghetto in Los Angeles who would one day become a beloved Hall-of-Fame shortstop: Ozzie Smith.

The Baseball Whisperer traces the remarkable story of Merl Eberly and his Clarinda A’s baseball team, which he tended over the course of five decades, transforming them from a town team to a collegiate summer league powerhouse. Along with Ozzie Smith, future manager Bud Black, and star player Von Hayes, Merl developed scores of major league players (six of which are currently playing). In the process, Merl taught them to be men, insisting on hard work, integrity, and responsibility.

More than a book about ballplayers who landed in the nation's agricultural heartland, The Baseball Whisperer is the story of a coach who puts character and dedication first, and reminds us of the best, purest form of baseball excellence.

MICHAEL TACKETT is an editor in the Washington Bureau for the New York Times. Previously, he was a managing editor for Bloomberg, the Washington Bureau Chief for the Chicago Tribune, and a National Editor for U.S. News & World Report. The Baseball Whisperer is his first book. He lives in Alexandria, Virginia.

"An uplifting take of old-fashioned values like loyalty and perseverance. Field of Dreams was only superficially about baseball. It was really about life. So is The Baseball Whisperer...with the added advantage of being all true." —MLB.com   "Gauzy portrait of a small-town, summer-league coach in Iowa who taught baseball and life, producing 36 pros."  —Sports Illustrated   “The Baseball Whisperer is a book that teaches the reader as much about hard work and American values as it does about the game of baseball. Through one man's efforts, hundreds of young men from all over the country and from different economic backgrounds came through a small town in Iowa and learned how to be better baseball players.  Along the way they also became better people. You don't have to love baseball or even sports to learn from the magic that happened in southwestern Iowa.” —Joe Buck, FOX Sports broadcaster     “In reading The Baseball Whisperer I was able to relive two glorious summers that had such a profound impact on both my personal and professional life. Merl, Mrs. E[berly], and the entire Clarinda community will always have a special place in my heart. To this day I still love telling stories about my time as a Clarinda A.”  —Bud Black, 2010 National League Manager of the Year and former A’s pitcher     "Mike Tackett, talented journalist and baseball lover, has hit the sweet spot of the bat with his first book. The Baseball Whisperer takes one coach and one small Iowa town and illuminates both a sport and the human spirit." —David Maraniss, author of Clemente and When Pride Still Mattered    "Michael Tackett takes us to a wonderful place and time in his heartwarming story about the small-town man who made big baseball dreams come true. The Baseball Whisperer is a compelling sports story, but it also delivers on the valuable life lessons that come from great sports leadership: hard work, honesty, compassion. The story of summer league baseball is the story of the American heartland, and Tackett has captured it beautifully." —Christine Brennan, USA Today sports columnist and ABC News, CNN, and PBS commentator   "For all who care about baseball, character and leadership, Michael Tackett has brought us the inspiring and unforgettable story of a phenomenal coach and his legacy." —Michael Beschloss, author of Presidential Courage   "Tackett reminds readers of just how close baseball lies to the nation’s heart . . . Deeply engrossing . . . One of baseball’s most humanizing backstories." —Booklist, starred review   "A remarkable tribute to an exceptional coach . . . Tackett’s story touts a man from small-town America who was a major influence on our national pastime." —Publishers Weekly   "A charming book about the affirmative side of sports." —Library Journal   "If you need a book about the affirmative side of sports, this is the one for you." —Evanston RoundTable   "It’s ideal summer reading, blending history, sports and the influence of one man on so many people."   —Des Moines Register   "A fitting tribute to the Eberlys . . . Also a tribute to Clarinda and the values of small towns." —St. Louis Post —