The Ugly Cry: How I Became a Person (Despite My Grandmother's Horrible Advice) (Paperback) 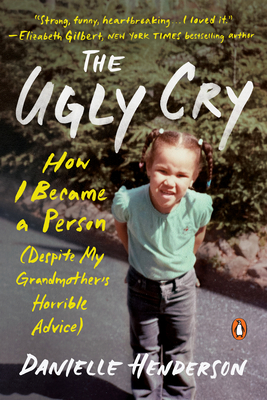 “They say comedy equals tragedy plus time: This very funny account of an often miserable childhood is proof.” --People

“What a strong, funny, heartbreaking memoir, with a voice that is completely its own (written by a woman who very much seems to be completely her own, as well.) I loved it.”--Elizabeth Gilbert, New York Times bestselling author of Big Magic and Eat, Pray, Love

An uproarious, moving memoir about a grandmother’s ferocious love and redefining what it means to be family

“If you fight that motherf**ker and you don’t win, you’re going to come home and fight me.” Not the advice you’d normally expect from your grandmother—but Danielle Henderson would be the first to tell you her childhood was anything but conventional.

Abandoned at ten years old by a mother who chose her drug-addicted, abusive boyfriend, Danielle was raised by grandparents who thought their child-rearing days had ended in the 1960s. She grew up Black, weird, and overwhelmingly uncool in a mostly white neighborhood in upstate New York, which created its own identity crises. Under the eye-rolling, foul-mouthed, loving tutelage of her uncompromising grandmother—and the horror movies she obsessively watched—Danielle grew into a tall, awkward, Sassy-loving teenager who wore black eyeliner as lipstick and was struggling with the aftermath of her mother’s choices. But she also learned that she had the strength and smarts to save herself, her grandmother gifting her a faith in her own capabilities that the world would not have most Black girls possess.

With humor, wit, and deep insight, Danielle shares how she grew up and grew wise—and the lessons she’s carried from those days to these. In the process, she upends our conventional understanding of family and redefines its boundaries to include the millions of people who share her story.

Danielle Henderson is a TV writer (Maniac, Dare Me, Harper House), retired freelance writer, and a former editor for Rookie. She cohosts the film podcast I Saw What You Did, and a book based on her popular website, Feminist Ryan Gosling, was released by Running Press in August 2012. She has been published by The New York Times, The Guardian, AFAR magazine, BuzzFeed, and The Cut, among others. She likes to watch old episodes of Doctor Who when she is on deadline, one of her tattoos is based on the movie Rocky, and she will never stop using the Oxford comma. Danielle reluctantly lives in Los Angeles.

"Danielle Henderson knows how to hold your attention...You hang on every word because this is the kind of friend you want to keep." --The New York Times Book Review

“I’ve struggled writing this blurb because hyperbole is unbelievable. Except the Grand Canyon really is astonishing and the universe does fill us with awe and Danielle Henderson’s memoir, The Ugly Cry, is the funniest memoir I have ever read. It is also achingly sad. And powerfully redemptive. The Ugly Cry raises the bar on how hilarious and brave and weird and crazy and screamingly brilliant a memoir can be. Danielle Henderson has knocked it out of the park and into the stratosphere with this debut.” --Augusten Burroughs, #1 New York Times bestselling author of Running with Scissors

"Equal parts hilarious and heartbreaking...Her deeply honest writing is crisp, engaging, and full of life as it examines the complexity of identity, family, childhood, and independence." --Associated Press

“Simultaneously heartbreaking and hilarious, Henderson dissects her unusual upbringing and her special relationship with her grandmother, offering a powerful examination of the many intersections between family and identity.” --TIME

"The book scissored my heart to shreds...The Ugly Cry is a vivid, voice-y, richly textured read." --The Washington Post

“Danielle Henderson is a wonderful writer, and this clear-eyed look at her complex and flawed childhood did make me cry, as the title promises, but it also made me laugh--that is the beauty of a life well told. I look forward to recommending The Ugly Cry to memoir-lovers, to mall-lovers, to tough grandma-lovers, to tough-sister-lovers--to everyone, really.” --Emma Straub, bestselling author of All Adults Here

“The Ugly Cry is funny and honest, disarming and bracing, like sharing a long meal with a new friend while she unspools the story of how she came to call her grandma the love of her life.” --Linda Holmes, bestselling author of Evvie Drake Starts Over

“Elder millennials in particular will find much to love in Henderson’s descriptions of her late-Gen-X childhood.” --Bustle

“Just as real life can so often be, Danielle Henderson’s The Ugly Cry is both hysterical and heart-wrenching. The TV writer touchingly recounts how she was raised by a tough-as-nails grandmother in a mostly white neighborhood in Upstate New York.” --Real Simple

“Can a book be hysterical and heartbreaking and smart all at the same time? The Ugly Cry can. It was painfully good and I loved it.” --Jenny Lawson, bestselling author of Furiously Happy

"[Henderson] renders her family with searing honesty and wit...[and] brings them to life with her indefatigable sense of humor, which is as quick and sharp as the violence she lived with as a child...sheopts for mirth over pathos, and the results are often shocking and funny simultaneously." --Bookpage, starred review

"Henderson writes with an incredible amount of vulnerability, presenting her story with a cleareyed compassion for her mother, grandmother, and, ultimately, herself. A redemptive memoir about a Black woman’s victory over childhood abuse, racism, and mental illness.” --Kirkus