Talking at the Gates: A Life of James Baldwin (Paperback) 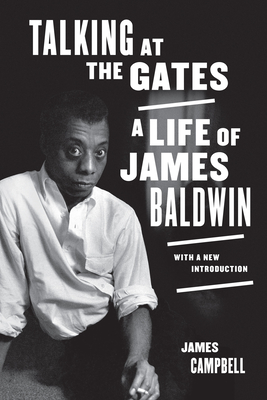 James Baldwin was one of the most incisive and influential American writers of the twentieth century. Active in the civil rights movement and open about his homosexuality, Baldwin was celebrated for eloquent analyses of social unrest in his essays and for daring portrayals of sexuality and interracial relationships in his fiction. By the time of his death in 1987, both his fiction and nonfiction works had achieved the status of modern classics.

James Campbell knew James Baldwin for the last ten years of Baldwin's life. For Talking at the Gates, Campbell interviewed many of Baldwin's friends and professional associates and examined several hundred pages of correspondence. Campbell was the first biographer to obtain access to the large file that the FBI and other agencies had compiled on the writer. Examining Baldwin's turbulent relationships with Norman Mailer, Richard Wright, Marlon Brando, Martin Luther King Jr., and others, this candid and original account portrays the life and work of a writer who held to the principle that "the unexamined life is not worth living."

This new edition features a fresh introduction addressing recent developments in Baldwin’s reputation and his return to a position he occupied in the early 1960s, when Life magazine called him "the monarch of the current literary jungle." It also contains a previously unpublished interview with Norman Mailer about Baldwin, which Campbell conducted in 1987.

James Campbell is the author of Exiled in Paris and This Is the Beat Generation. He was born in Glasgow, Scotland, and was for many years an editor and columnist at the Times Literary Supplement in London.

"Frank and affectionate. . . . Approaching Baldwin without reverence, though not quite irreverently, Campbell brings a mixture of intellectual integrity and something like truculence to the biographer's task."
— Times Literary Supplement

"Campbell has met the challenge and written a first-rate work. The best biography so far. . . . He deals not only with the facts of his subject's life but also with his works."
— Chicago Tribune

"A life-sized portrait in very broad strokes. . . . . A lively book that is immensely readable, serious, careful, and informed."
— Boston Globe

"A marvelously illuminating literary biography . . . . [and] an affectionate yet critical portrait."
— Publishers Weekly