From Noose to Needle: Capital Punishment and the Late Liberal State (Law, Meaning, And Violence) (Paperback) 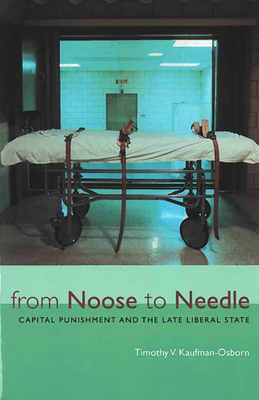 From Noose to Needle contributes a new perspective on the controversial topic of capital punishment by asking how the conduct of state killing reveals broader contradictions in the contemporary liberal state, especially, but not exclusively, in the United States. Moving beyond more familiar legal and sociological approaches to this matter, Timothy V. Kaufman-Osborn asks several questions. Why do executions no longer take the form of public spectacles? Why are certain methods of execution considered barbaric? Why must the liberal state strictly segregate the imposition of a death sentence, whether by judge or jury, from its actual infliction, whether by a state official or an ordinary citizen? Why are women so infrequently sentenced to death and executed? How does the state seek to hide the suffering inflicted by capital punishment through its endorsement of a bio-medical conception of pain? How does the nearly-universal shift to lethal injection pose problems for the late liberal state by confusing its punitive and welfare responsibilities?
Drawing on a wide range of theoretical sources, including John Locke, Max Weber, Nicos Poulantzas, Friedrich Nietzsche, J. L. Austin, Michel Foucault, Judith Butler, Pierre Bourdieu, Elaine Scarry, and others, Kaufman-Osborn grounds his appropriation of these authors in analyses of specific recent executions, including that of Wesley Allan Dodd and Charles Campbell in Washington, Karla Faye Tucker in Texas, and Allen Lee Davis in Florida.
From Noose to Needle will be of interest to students of law, political theory, and sociology as well as more general readers interested in the troublesome issue of capital punishment.
Timothy V. Kaufman-Osborn is Baker Ferguson Professor of Politics and Leadership, Whitman College.

"The modern state's long road from the noose to the needle, from carnivals of death to medicalized acts of euthanasia, is littered with victims. And the most noteworthy victim is the liberal state's own identity, an identity wrapped up in the claim to both humanistic rationality and the monopoly of legitimized violence. Behind the clinical machinery of technically perfect executions, the modern state hopes to absolve itself of any hint of inhumanity while reasserting its sovereignty. It is, we are told, a vain effort. . . . . Kaufman-Osborn provokes us to reflect deeply about the meaning of capital punishment in late modernity. And he provides much in the way of historical and theoretical guidance for our reflections."
—Perspectives on Politics