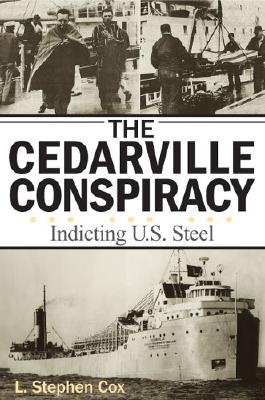 On the morning of May 7, 1965, the American freighter Cedarville collided with the Norwegian vessel Topdalsfjord in heavy fog in the Straits of Mackinac. Ultimately, ten crew members of the Cedarville died and a legal battle ensued implicating U.S. Steel---the company that owned the Cedarville---in the chain of events leading to the tragedy.

The Cedarville Conspiracy is the story of that doomed ship and its crew. It is also the first Great Lakes history to expose the heroism, villainy, courage, and confusion surrounding the Cedarville disaster.

In atmospheric, cinematic style, L. Stephen Cox's gripping page-turner dramatizes the events surrounding the collision between the Norwegian and American freighters. As the mortally wounded Cedarville began to list and sink, U.S. Steel refused to allow the crew to escape to safety, while the captain secretly donned his life jacket and abandoned the sinking ship. Ten seamen died in the frigid waters that morning as the captain and survivors swam to safety.

Researching the story, author L. Stephen Cox interviewed the surviving crew and their rescuers and attorneys, examined more than 20,000 pages of Coast Guard reports, and discovered deposition transcripts and other documentary evidence that detailed the deterioration of the ship, the captain's disregard of Great Lakes navigational rules, the company's participation in the decision to confine the men aboard the sinking vessel, and the subsequent efforts by U.S. Steel to manipulate the evidence.