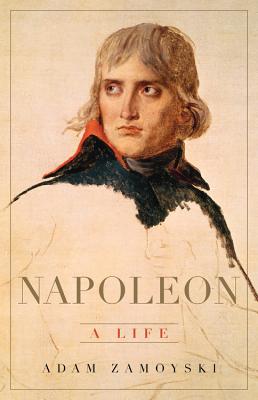 By Adam Zamoyski
$40.00
ON HAND in at least ONE of our stores. Click through or call for up-to-the-minute availability.

The definitive biography of Napoleon -- hailed as "magnificent" by The Economist.

"What a novel my life has been!" Napoleon once said of himself. Born into a poor family, the callow young man was, by twenty-six, an army general. Seduced by an older woman, his marriage transformed him into a galvanizing military commander. The Pope crowned him as Emperor of the French when he was only thirty-five. Within a few years, he became the effective master of Europe, his power unparalleled in modern history. His downfall was no less dramatic.

The story of Napoleon has been written many times. In some versions, he is a military genius, in others a war-obsessed tyrant. Here, historian Adam Zamoyski cuts through the mythology and explains Napoleon against the background of the European Enlightenment, and what he was himself seeking to achieve. This most famous of men is also the most hidden of men, and Zamoyski dives deeper than any previous biographer to find him. Beautifully written, Napoleon brilliantly sets the man in his European context.

Adam Zamoyski is the author of numerous books about Polish and European history, and has written for publications including the Times (London), the Times Literary Supplement, and the Guardian. He lives in London and Poland.

"It is the outstanding merit of Adam Zamoyski's fine new biography, Napoleon: A Life, that he insists on treating his subject as neither a superman nor a monster, but as a creature of his troubled age...Zamoyski gives us...a vivid sense of Napoleon as a protean chancer, outwardly self-confident as any man who ever lived, inwardly always wondering when his 'star' would finally set."—New York Review of Books

"Zamoyski...attempts to cut through the fantasy and retrospective exaggeration to tell the story of an extraordinary, but certainly not superhuman life.... Napoleon emerges from Mr. Zamoyski's book a willful, self-made opportunist...gifted, energetic, brave, lucky, but also a bit ridiculous."
—Wall Street Journal

"Magnificent...Napoleon was neither demon nor deity. He was a man, with great talents and great flaws, often intertwined...[Mr. Zamoyski] writes beautifully."
—Economist

"Zamoyski tells the personal side of Napoleon's life...his hopes, his dreams, his self-doubts."
—New York Journal of Books

"Zamoyski's book is one of the finest biographies of Napoleon Bonaparte ever written."
—MHQ: Quarterly Journal of Military History

"A lifetime's diligent research and profound thinking about Napoleon and his times has gone into this hugely readable, highly enjoyable and well-balanced biography. Zamoyski is at the top of his game as a biographer."
—Andrew Roberts, Visiting Professor, Department of War Studies, King's College, London, -

"A biography of Napoleon Bonaparte that avoids the well-established military details and gives us the story of a singular man...Illuminating."
—Kirkus

"Engaging and highly readable.... An inclusive life of a historical dynamo."
—Washington Times

"Adam Zamoyski's 700-plus-page but very readable Napoleon: A Life...shows how France's tired post-revolutionary leaders in 1796 recognized they were riding a tiger---but didn't expect him to eat them."—World Magazine

"A superb history of a complicated man and time."
—Choice

A success in all respects, rivaling Andrew Roberts's Napoleon: A Life in astuteness and thoroughness.... The picture that emerges is of an extraordinarily gifted leader who increasingly sought short-term gain at the expense of long-term stability.... Exhaustively researched and engagingly written."—Library Journal, starred review

"Napoleon is an out and out masterpiece and a joy to read."—Sir Antony Beevor, author of Stalingrad: The Fateful Siege

"Always elegant in style and original in analysis. Zamoyski, a master of the sources and of the culture and politics that created his subject, produces a fresh, nuanced, beautifully written, gripping, and outstanding biography of Napoleon that reveals him to be a triumph of luck and accident as much as the invincible genius of the legend."
—Simon Sebag-Montefiore, author of The Romanovs and Jerusalem: the Biography

"Adam Zamoyski has retold a story that we thought we knew and made it fresh: Stripping away two centuries of mythology, discarding the apocryphal stories and legends, he finally brings us the real Napoleon."
—Anne Applebaum, author of Red Famine: Stalin's War on Ukraine

"Zamoyski sticks close to verifiable primary sources...What we get is more a historical Napoleon than the colossus of cultural memory, but a figure no less fascinating for that. Napoleon's life was a rollercoaster and Zamoyski takes us along for the ride."
—Toronto Star

"A masterful historian, Zamoyski fulfills his task eloquently. Napoleon is often called a military and political genius, but in reading Zamoyski, the question arises: how much of Napoleon's perceived greatness was owing...to timing and circumstance in the stormy political world of 18th-century revolutionary France?"
—Winnipeg Free Press