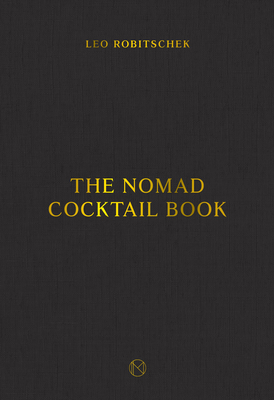 By Leo Robitschek
$30.00
On Our Shelves Now. Call store for up-to-the-minute availability.

An illustrated collection of nearly 300 cocktail recipes from the award-winning NoMad Bar, with locations in New York, Los Angeles, and Las Vegas.

Originally published as a separate book packaged inside The NoMad Cookbook, this revised and stand-alone edition of The NoMad Cocktail Book features more than 100 brand-new recipes (for a total of more than 300 recipes), a service manual explaining the art of drink-making according to the NoMad, and 30 new full-color cocktail illustrations (for a total of more than 80 color and black-and-white illustrations). Organized by type of beverage from aperitifs and classics to light, dark, and soft cocktails and syrups/infusions, this comprehensive guide shares the secrets of bar director Leo Robitschek's award-winning cocktail program. The NoMad Bar celebrates classically focused cocktails, while delving into new arenas such as festive, large-format drinks and a selection of reserve cocktails crafted with rare spirits.

LEO ROBITSCHEK is the bar director for Make It Nice, which runs Eleven Madison Park; The NoMad in New York, Los Angeles, and Las Vegas; and Davies and Brook, opening in London in summer 2019. A native of Venezuela, Leo and his team have been the recipients of numerous Tales of the Cocktail Spirited Awards and the James Beard Award for Outstanding Bar Program, and the NoMad Bar has twice been named best bar in North America on the World's 50 Best Bars list.

ANTOINE RICARDOU is the founder of Studio Be-Poles, a boutique design studio based in Paris and New York. Antoine is responsible for the graphic identity of the NoMad hotels and the bespoke art program for each of the hotels' guest rooms and dining rooms.

Praise for the NoMad Bar:

"When the NoMad Hotel opened in 2012 in New York City, cocktail veteran Leo Robitschek--who devised the drinks menu at acclaimed restaurant Eleven Madison Park--was behind the gorgeous mahogany bar, serving his own creations...alongside classic quaffs. The hotel bar soon became so popular with both guests and those seeking a happy-hour fix that Robitschek and his EMP partners Daniel Humm and Will Guidara decided to open a larger drinking den to satisfy demand. The NoMad Bar debuted in the summer of 2014, and quickly became one of the city's hottest destinations." --Conde Naste Traveler

"This elegant saloon inside the NoMad hotel [is] teeming with lofty pub grub, digs worthy of 007...[and], with a mob-movie masculinity, is the most boisterous of the hotel's bunch, a dazzling anomaly of a pub." --Time Out New York