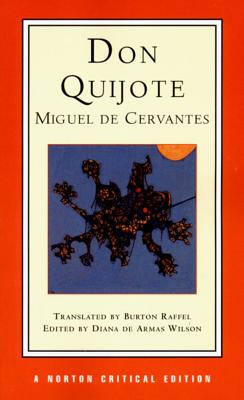 The text reprinted here is based on award-winning translator Burton Raffel’s masterful translation of Don Quijote, which is consistent, fluid, and modeled closely on the original Spanish.

"Backgrounds and Context" invites readers to explore the creative process that culminated in the publication of Don Quijote.  Included are selections from works parodied by Cervantes (Amadis of Gaul and Orlando Furioso) and a portion of the spurious sequel to Part 1 written by Fernándes de Avellaneda.

"Criticisms" presents fifteen major interpretations of both the novel and selected episodes, describing Cervantes’ intellectual milieu, revealing how he infused new life into the literary modes and motifs he had inherited, and illustrating the fundamental importance of Don Quijote in the history of modern fiction.

Diana de Armas Wilson is Professor Emerita of English and Renaissnace Studies at the University of Denver. She is the author of Allegories of Love: Cervantes’s Persiles and Sigismunda; co-editor of Quixotic Desire: Psychoanalytic Perspectives on Cervantes; and author of Cervantes, the Novel, and the New World.

Burton Raffel is Distinguished Professor of Humanities at the University of Louisiana at Lafayette Emeritus. He is the translator of many works, including Gargantua and Pantagruel (awarded the French-American Foundation Translation Prize), Pere Goriot, Beowulf, and the five romances of Chrétien de Troyes.