The Tale of Genji (Paperback) 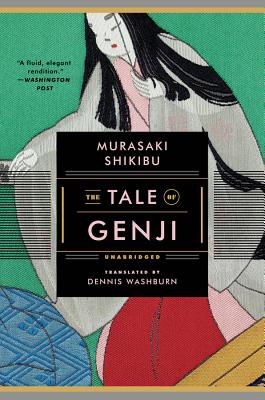 By Shikibu Murasaki, Dennis Washburn (Translated by)
$24.95
ON HAND in at least ONE of our stores. Click through or call for up-to-the-minute availability.

Murasaki Shikibu, born into the middle ranks of the aristocracy during the Heian period (794–1185 CE), wrote The Tale of Genji—widely considered the world’s first novel—during the early years of the eleventh century. Expansive, compelling, and sophisticated in its representation of ethical concerns and aesthetic ideals, Murasaki’s tale came to occupy a central place in Japan’s remarkable history of artistic achievement and is now recognized as a masterpiece of world literature.

The Tale of Genji is presented here in a flowing new translation for contemporary readers, who will discover in its depiction of the culture of the imperial court the rich complexity of human experience that simultaneously resonates with and challenges their own. Washburn sets off interior monologues with italics for fluid reading, embeds some annotations for accessibility and clarity, and renders the poetry into triplets to create prosodic analogues of the original.

Dennis Washburn is the Burlington northern Foundation professor of Asian studies at Dartmouth College. He holds a Ph.D. in Japanese Language and Literature from Yale University and has authored and edited studies on a range of literary and cultural topics. These include: The Dilemma of the Modern in Japanese Fiction; Translating Mount Fuji: Modern Japanese Fiction and the Ethics of Identity; and The Affect of Difference: Representations of Race in East Asian Empire. In addition to his scholarly publications, he has translated several works of Japanese fiction, including Yokomitsu Riichi’s Shanghai, Tsushima Tsushima Tuko’s Laughing Wolf, and Mizukami Tsutomu’s The Temple of the Wild Geese, for which he was awarded the US-Japan Friendship Commission Prize. In 2004 he was awarded the Japan Foreign Minister’s citation for promoting cross-cultural understanding.

This new version by Dennis Washburn, a professor at Dartmouth, falls somewhere between Seidensticker’s reader-friendly translation and Tyler’s more stringently literal one, resulting in a fluid, elegant rendition.

Murasaki watched the sexual maneuverings, the social plots, the marital politics, the swirl of slights and flatteries that went on around her, with the keen, sometimes sardonic, and always worldly eyes of a medieval Jane Austen.

Washburn’s translation is a superb achievement. He fully captures the enthralling quality of the original, with its reliance on dialogue and interior monologues, and finely tunes the diction to the age, status and emotional state of the characters, as well as to the demands of the social situation…With exquisite irony, the narrative progressively reveals that the seductive myth of romance is quite empty at its core. Washburn’s version brings this out powerfully.

This is the Washburn Tale of Genji from start to finish: immensely scholarly but also, somehow, uncannily readable, helpful without being pedantic, clarifying without ever simplifying…. It’s an amazingly cheering performance, a Genji to last a century.


In Dennis Washburn’s new translation of The Tale of Genji, lovers of novels will have the literary experience denied them until now: for hours and weeks at a time they will be able to sink into the dark, titillating, sexy, sad, enraging, absorbing world of this, the world’s first novel, written by Murasaki Shikibu, the imaginative genius court woman of eleventh-century Japan. Washburn eliminates the gap in centuries between us and that long-lost world, and preserves for us the freshness of vision and voice of that great writer from long ago and her Proustian chronicling of the darkening beauty of a world in decline, a world depleted of male erotic power and female depredation, of the tortures of jealousy and the frailness of art and beauty to console.

A formidable accomplishment. The language is beautiful, the footnotes are helpful yet unobtrusive: Washburn has performed a great service by making this groundbreaking novel, written in the eleventh century, available to the English-speaking world in a version worthy of the Japanese masterpiece.
— Edith Grossman

Retranslations of a classic are always reason to celebrate. All the more so when it’s the Genji, with all its complex characters and unforgettable episodes. One tries to begin logically, from the first page, but can’t resist flipping ahead to locate favorite scenes and see how they are imagined anew. . . . A fresh and invaluable Tale of Genji for both those of us reuniting with a familiar friend and those encountering it for the very first time.