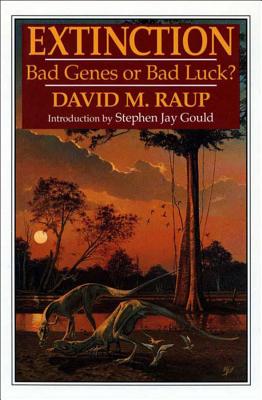 This is the first major book to present a comprehensive overview of the current state of extinction studies. At the end of the journey, Raup has put forward the best science of the day to answer the question posed by the title: Bad genes or bad luck?

In the geological record, there are five major mass extinctions—the "Big Five." The most famous happened at the end of the Cretaceous Period, when the dinosaurs and two-thirds of all marine animal species were wiped out, opening the door for the age of mammals and the rise of Homo Sapiens. Using this example as a springboard, David M. Raup leaps into an egaging discussion of the theories, assumptions, and difficulties associated with the science of species extinction. Woven is along the way are stories of the trilobite eye, tropical reefs, flying reptiles, and the fate of the heath hen on Martha's Vineyard, a very modern extinction.

David M. Raup is the Sewell Avery Distinguished Service Professor and a statistical paleontologist at the University of Chicago.

Stephen Jay Gould (1941-2002) was the Alexander Agassiz Professor of Zoology and Professor of Geology at Harvard University. He published over twenty books, received the National Book and National Book Critics Circle Awards, and a MacArthur Fellowship.

A delightful little book about life on this planet and about extinctions, in particular. It is as much about the philosophy and methodology of science as about the downside of evolution.
— Clark R. Chapman, Planetary Science Institute