Where the Dead Pause, and the Japanese Say Goodbye: A Journey (Hardcover) 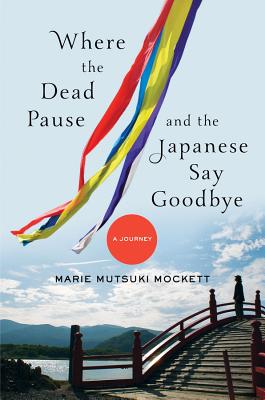 “Mockett's journey begins in the wake of the 2011 earthquake and tsunami in Japan, near the site of the Fukushima Daiichi power plant, and encompasses a nation's grieving as well as her own. Through her beautiful descriptions of traditions, rituals, conversations, and quiet moments, she shows the nuances of a people picking up and moving on. By seeking out the cultural context of her subject's very human reactions and emotions, Mockett walks a fine line that globalization has tried to erase entirely, and our understanding of the events and their aftermath is richer for it.”
— Rachel Cass, Harvard Book Store, Cambridge, MA

How does one cope with overwhelming grief?

Marie Mutsuki Mockett's family owns a Buddhist temple 25 miles from the Fukushima Daiichi nuclear power plant. In March 2011, after the earthquake and tsunami, radiation levels prohibited the burial of her Japanese grandfather's bones. As Japan mourned thousands of people lost in the disaster, Mockett also grieved for her American father, who had died unexpectedly.

Seeking consolation, Mockett is guided by a colorful cast of Zen priests and ordinary Japanese who perform rituals that disturb, haunt, and finally uplift her. Her journey leads her into the radiation zone in an intricate white hazmat suit; to Eiheiji, a school for Zen Buddhist monks; on a visit to a Crab Lady and Fuzzy-Headed Priest’s temple on Mount Doom; and into the "thick dark" of the subterranean labyrinth under Kiyomizu temple, among other twists and turns. From the ecstasy of a cherry blossom festival in the radiation zone to the ghosts inhabiting chopsticks, Mockett writes of both the earthly and the sublime with extraordinary sensitivity. Her unpretentious and engaging voice makes her the kind of companion a reader wants to stay with wherever she goes, even into the heart of grief itself.

Marie Mutsuki Mockett’s novel Picking Bones from Ash was shortlisted for the 2010 Saroyan Prize and the Asian American Literary Awards for Fiction and was a finalist for the Paterson Prize. She has written for the New York Times, Salon, National Geographic, and other publications. She lives in San Francisco.

An intriguing… travelogue through a landscape of Japanese spiritual belief, with forays into history, folklore, and memoir. [Mockett] has the ability, fully available only to those on the margins, “to see through more than one set of eyes, if one learns to pay attention to one’s environment.” It is this gift of double-sightedness, of bringing to bear both the “dry” rationality of the West and the “sticky” sensibilities professed by the Japanese, that makes this the most interesting book so far to have come out of the disaster.
— Richard Lloyd Parry

Marie Mockett has taken the most spectacular catastrophe of our era and used it to teach us astonishing things about faith, perseverance, and the mysteries of the soul. Her journey through personal grief and the devastation of Japan after the 2011 tsunami and nuclear disaster brings us into a sacred space. With this book, Marie Mockett brought me into the high drama of the tsunami, through her most personal landscape, and into the awe of the eternal.
— Luis Alberto Urrea, Pulitzer Prize finalist for The Devil's Highway

Richly layered in culture and insight, Mockett takes us on a compelling and illuminating journey of the heart and soul.
— Gail Tsukiyama, author of A Hundred Flowers

This book speaks to my heart. Grief is part of what it means to be human, and Marie Mutsuki Mockett's book models an approach to grief, an attitude of courage, curiosity, and inquiry that is our birthright, as humans, wherever we happen to be born. Read it. You will be uplifted.
— Ruth Ozeki, Zen priest, author of A Tale for the Time Being

A beautiful tale that is part evocative travelogue and part lyrical meditation on grief, this soulful and haunting book made me cry in a way I like to cry when reading a good book. Where the Dead Pause, and the Japanese Say Goodbye will resonate with anyone who has lost a loved one, a homeland, or a home and hoped for healing on the other side.

— Heidi W. Durrow, New York Times best-selling author of The Girl Who Fell from the Sky

What a remarkable and moving book about traveling from one land to another, and learning different ways of coming to terms with death amid life. Engrossing and powerful, it speaks volumes about the many ways people grieve and live.
— Will Schwalbe, author of the New York Times bestseller The End of Your Life Book Club

A poignant spiritual journey through Japan… Touching on themes of modernity and tradition, Mockett takes part in various religious customs to come to terms with her grief and understand her mixed-cultural heritage.

Mockett is the perfect translator for the ways East and West frequently miss each other, and these observations are one of the book’s many pleasures… a fascinating, wide-reaching exploration of the religious and cultural elements of this island nation.

This affecting memoir… effectively evokes the beauty of Japanese culture and the sorrow that swept the country in the tsunami’s wake.

Mockett skillfully knits together a portrait of loss and recovery, pulling together many individuals’ experience of grief into a collective search for peace.

An illuminating journey into grief and Japanese culture, a place that few would dare to venture.

Mockett’s involving and revelatory chronicle of Japanese spirituality in a time of crisis greatly enriches our perceptions of both a unique culture and the human longing for connection with the dead.

Mockett… is an observant and respectful guide to Japanese customs, open to new experiences and sensitive to changes in the culture.

This illuminating journey through loss, faith, and perseverance… gives the reader a rare view into one of the richest death cultures in the world.

Depicts a Japan both secular and spiritual, and a people whose apparent stoicism can be a bulwark against chaos.