The Book of Genesis Illustrated by R. Crumb (Hardcover) 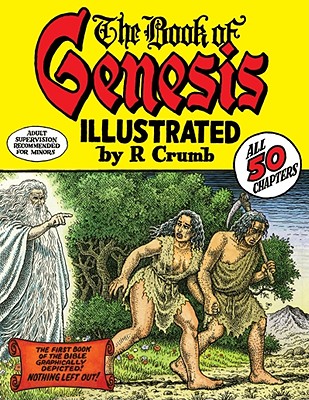 Nominated for three 2010 Will Eisner Comic Industry Awards: From Creation to the death of Joseph, here are all 50 chapters of the Book of Genesis, revealingly illustrated as never before.

Envisioning the first book of the bible like no one before him, R. Crumb, the legendary illustrator, reveals here the story of Genesis in a profoundly honest and deeply moving way. Originally thinking that we would do a take off of Adam and Eve, Crumb became so fascinated by the Bible’s language, “a text so great and so strange that it lends itself readily to graphic depictions,” that he decided instead to do a literal interpretation using the text word for word in a version primarily assembled from the translations of Robert Alter and the King James bible.

Now, readers of every persuasion—Crumb fans, comic book lovers, and believers—can gain astonishing new insights from these harrowing, tragic, and even juicy stories. Crumb’s Book of Genesis reintroduces us to the bountiful tree lined garden of Adam and Eve, the massive ark of Noah with beasts of every kind, the cities of Sodom and Gomorrah destroyed by brimstone and fire that rained from the heavens, and the Egypt of the Pharaoh, where Joseph’s embalmed body is carried in a coffin, in a scene as elegiac as any in Genesis. Using clues from the text and peeling away the theological and scholarly interpretation that have often obscured the Bible’s most dramatic stories, Crumb fleshes out a parade of Biblical originals: from the serpent in Eden, the humanoid reptile appearing like an alien out of a science fiction movie, to Jacob, a “kind’ve depressed guy who doesn’t strike you as physically courageous,” and his bother, Esau, “a rough and kick ass guy,” to Abraham’s wife Sarah, more fetching than most woman at 90, to God himself, “a standard Charlton Heston-like figure with long white hair and a flowing beard.”

As Crumb writes in his introduction, “the stories of these people, the Hebrews, were something more than just stories. They were the foundation, the source, in writing of religious and political power, handed down by God himself.” Crumb’s Book of Genesis, the culmination of 5 years of painstaking work, is a tapestry of masterly detail and storytelling which celebrates the astonishing diversity of the one of our greatest artistic geniuses.

Born in Philadelphia, R. Crumb is the author of numerous comic works and one of the pioneers of underground comics and arguably one of the most famous cartoonists in history. His books include The Book of Genesis Illustrated by R. Crumb, and many more. He lives in the south of France with his wife, the artist Aline Kominsky-Crumb.

The best place to witness Crumb's genius. Largely stripped of the sociopolitical context that has made his comics so controversial over the years, Genesis’ portraits of ancient men and women struggling to survive shows that his primary interest lies in chronicling the physical and mental experience of being human.

Starred Review. Crumb’s vivid visual characterizations of the myriad characters, pious and wicked, make the most striking impression. His distinctive, highly rendered drawing style imparts a physicality that few other illustrated versions of this often retold chronicle have possessed. The centenarian elders show every one of their years, and the women, from Eve to Rachel, are as solidly sensual as any others Crumb has so famously drawn.
— Booklist

To say this book is a remarkable volume or even a landmark volume in comic art is somewhat of an understatement.... stands on its own as one of this century’s most ambitious artistic adaptations of the West’s oldest continuously told story.
— Paul Buhle - The Jewish Daily Forward

It’s a cartoonist’s equivalent of the Sistine Chapel. It’s awesome.
Crumb has done a real artist’s turn here—he’s challenged himself and
defied all expectation. ... I’ve read Genesis before. But never have I
found it so compelling. By placing it squarely in the Middle East—and
populating it with distinctively Semitic-looking people—Crumb makes it
come alive brilliantly.
— Susan Jane Gilman - Morning Edition, NPR

[A] beautifully drawn and relentlessly faithful rendition of the first 50 chapters of the Bible by an apostle of the 1960s and sometimes profane progenitor of underground comics. Crumb has produced what could be the ultimate graphic novel.
— David Colton - USA Today