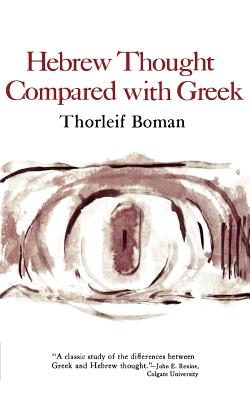 By Thorleif Boman
$18.95
NOT on our shelves now. Usually ships from warehouse in several days.

"Builds on the premise that language and thought are inevitably and inextricably bound up with each other. . . . A classic study of the differences between Greek and Hebrew thought."—John E. Rexrine, Colgate University

"In its patient, lucid philological approach to crucial issues, in its breathtakingly compact treatment of significant voices from Heraclitus to Job to Bergson, and in the studied independence of its own lines of development and conclusions, Boman's book is a modest masterpiece. It must be read not only by those who are concerned with the theological facets of the problem but by anyone who claims any interest in the problem of thinking in Western culture."—Christian Century


"It might be said with some truth that he must be armoured in robur et aes triplex who essays the comparison between Hebrew and Greek thought. . . . The Scandinavian professor who has written this challenging book appears to be such a paragon. . . . A particularly interesting section of the book is devoted to a comparison between Hebrew and Greek conceptions of Time and Space. . . . Valuable and original."—Times Literary Supplement