On the Origins of War: And the Preservation of Peace (Paperback) 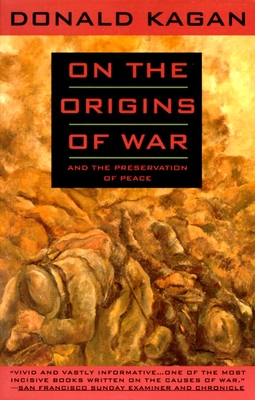 By Donald Kagan
$21.00
NOT on our shelves now. Usually ships from warehouse in several days.

A brilliant and vitally important history of why states go to war, by the acclaimed, award-winning author of The Peloponnesian War.

War has been a fact of life for centuries. By lucidly revealing the common threads that connect the ancient confrontations between Athens and Sparta and between Rome and Carthage with the two calamitous World Wars of the twentieth century, renowned historian Donald Kagan reveals new and surprising insights into the nature of war and peace. Vivid, incisive, and accessible, Kagan's powerful narrative warns against complacency and urgently reminds us of the importance of preparedness in times of peace.

Donald Kagan is Sterling Professor of Classics and History at Yale University. A former dean of Yale College, he received his Ph.D. in 1958 from The Ohio State University. His publications include On the Origins of War and the Preservation of Peace, The Peloponnesian War, and Thucydides: The Reinvention of History. In 2002 he was the recipient of the National Humanities Medal and in 2005 was named the National Endowment for the Humanities Jefferson Lecturer.

Praise for Donald Kagan's On the Origins of War

“Humane and penetrating . . . Kagan shows how, tragically, measures undertaken precisely to prevent war have in the past repeatedly brought it closer.”—The New Criterion

“By now it is all too clear that the so-called end of history really has meant the return of history, with a vengeance. Recent events regrettably confirm that warfare is inherent to any system of world affair yet imagined, so we better do all we can to prevent it. Professor Kagan's impressive volume presents thoughts that are timely, intellectually deep, and just about indispensable.”—George P. Schultz, Former U.S. Secretary of State