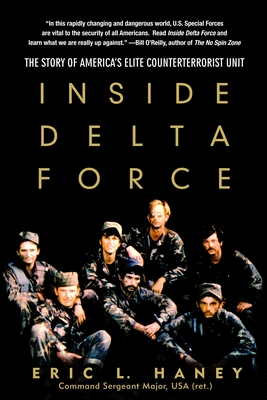 By Eric Haney;
Not available to order
Backordered--delivery time uncertain

Now the inspiration for the CBS Television drama, "The Unit."

Delta Force. They are the U.S. Army's most elite top-secret strike force. They dominate the modern battlefield, but you won't hear about their heroics on CNN. No headlines can reveal their top-secret missions, and no book has ever taken readers inside—until now. Here, a founding member of Delta Force takes us behind the veil of secrecy and into the action-to reveal the never-before-told story of 1st Special Forces Operational Detachment-D (Delta Force).

He is a master of espionage, trained to take on hijackers, terrorists, hostage takers, and enemy armies. He can deploy by parachute or arrive by commercial aircraft. Survive alone in hostile cities. Speak foreign languages fluently. Strike at enemy targets with stunning swiftness and extraordinary teamwork. He is the ultimate modern warrior: the Delta Force Operator.

In this dramatic behind-the-scenes chronicle, Eric Haney, one of the founding members of Delta Force, takes us inside this legendary counterterrorist unit. Here, for the first time, are details of the grueling selection process—designed to break the strongest of men—that singles out the best of the best: the Delta Force Operator.

With heart-stopping immediacy, Haney tells what it's really like to enter a hostage-held airplane. And from his days in Beirut, Haney tells an unforgettable tale of bodyguards and bombs, of a day-to-day life of madness and beauty, and of how he and a teammate are called on to kill two gunmen targeting U.S. Marines at the Beirut airport. As part of the team sent to rescue American hostages in Tehran, Haney offers a first-person description of that failed mission that is a chilling, compelling account of a bold maneuver undone by chance—and a few fatal mistakes.

From fighting guerrilla warfare in Honduras to rescuing missionaries in Sudan and leading the way onto the island of Grenada, Eric Haney captures the daring and discipline that distinguish the men of Delta Force. Inside Delta Force brings honor to these singular men while it puts us in the middle of action that is sudden, frightening, and nonstop around the world.

ERIC L. HANEY, Command Sergeant Major, USA (ret.), served for more than twenty years in the United States Army’s most demanding combat units: as a combat infantryman, a Ranger, and ultimately as a founding member of Delta Force. In his retirement, Haney has protected princes, presidents, and CEOs alike. He has negotiated with Latin American guerrillas for the safe return of hostages, rescued American children kidnapped around the world, and provided security for international oil companies operating in the most dangerous regions on earth. Today Haney lives and writes in the relative peace and quiet of Marietta, Georgia.

"In this rapidly changing and dangerous world, U.S. Special Forces are vital to the security of all Americans. CSM Eric Haney is perhaps the World's foremost expert on military special ops. Read INSIDE DELTA FORCE and learn what we are really up against."
--Bill O'Reilly, Anchor, Fox News Channel

"A book that could not be more timely, written by a warrior who knows what he's talking about.."
--James Webb, author of Fields of Fire and Lost Soldiers

“A rousing chronicle of what it’s really like to be a special-ops guy.”
--Esquire

“Compelling memoir...a book that you won’t want to put down.”
--Playboy