Arsenals of Folly: The Making of the Nuclear Arms Race (Hardcover) 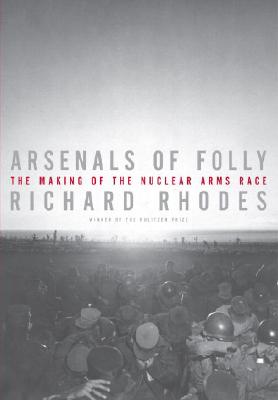 From the Pulitzer Prize–winning author of The Making of the Atomic Bomb: the story of the entire postwar superpower arms race, climaxing during the Reagan-Gorbachev decade when the United States and the Soviet Union came within scant hours of nuclear war—and then nearly agreed to abolish nuclear weapons.

In a narrative that reads like a thriller, Rhodes reveals how the Reagan administration’s unprecedented arms buildup in the early 1980s led ailing Soviet leader Yuri Andropov to conclude that Reagan must be preparing for a nuclear war. In the fall of 1983, when NATO staged a larger than usual series of field exercises that included, uniquely, a practice run-up to a nuclear attack, the Soviet military came very close to launching a defensive first strike on Europe and North America. With Soviet aircraft loaded with nuclear bombs warming up on East German runways, U.S. intelligence organizations finally realized the danger. Then Reagan, out of deep conviction, launched the arms-reduction campaign of his second presidential term and set the stage for his famous 1986 summit meeting with Gorbachev in Reykjavik, Iceland, and the breakthroughs that followed.

Rhodes reveals the early influence of neoconservatives and right-wing figures such as Richard Perle, Donald Rumsfeld, Dick Cheney, and Paul Wolfowitz. We see how Perle in particular sabotaged the Reykjavik meeting by convincing Reagan that mutual nuclear disarmament meant giving up his cherished dream of strategic defense (the Star Wars system). Rhodes’s detailed exploration of these and other events constitutes a prehistory of the neoconservatives, demonstrating that the manipulation of government and public opinion with fake intelligence and threat inflation that the administration of George W. Bush has used to justify the current “war on terror” and the disastrous invasion of Iraq were developed and applied in the Reagan era and even before.

Drawing on personal interviews with both Soviet and U.S. participants, and on a wealth of new documentation, memoir literature, and oral history that has become available only in the past ten years, Rhodes recounts what actually happened in the final years of the Cold War that led to its dramatic end. The story is new, compelling, and continually surprising—a revelatory re-creation of a hugely important era of our recent history.

“Every age finds the writers it needs, and the nuclear age has found Richard Rhodes.”
-The Nation

“Throughout his assiduously researched work, Rhodes cites stunning statistics to support his contention that the nuclear competition has run amok . . . dense with crucial, revealing information obtained from personal interviews and newly declassified documents, Rhodes’s Arsenals of Folly is a dramatic and penetrating investigation of the nuclear arms race and its eventual end.”
-The Philadelphia Inquirer

“A terrifying overview of the global potential for killing.”
-The Economist

“Rhodes performs the remarkable feat of reconstructing all the niggling, the misunderstanding, the moments of obtuseness in a way that proves dramatic precisely in its repetitiveness and frustration.”
-Newsday

“Using an impressive range of sources, clean writing and a clear sense of the dramatic, Rhodes triumphs.”
-Rocky Mountain News

“As a contribution to our understanding of the latter half of the 20th century, Rhodes’s achievement is on a par with Taylor Branch’s America in the King Years trilogy and Robert Caro’s monumental ongoing biography of Lyndon B. Johnson.”
-The Mercury News (San Jose, CA)

“Rhodes is not only an outstanding researcher and historian, he is a superb writer who enraptures the reader with a gripping narrative. Upon reading this important book, one will walk away ruminating on the unspeakable horror of the nuclear apocalypse that was, it often seems miraculously, avoided during the Cold War.”
-The Sunday Star-Ledger

“Stylistically, Arsenals of Folly is often quite distinguished. The impressive opening chapter–which describe the Chernobyl disaster in a controlled but morbidly involving tone–is an achievement . . . as an allegory of manipulated intelligence, miscalculation, and fatal ideology, it is alarmingly relevant.”
-The Tennessean

“No finer manual for learning from the mistakes of our past than [this] valuable book.”
-Seed magazine

“Detailed and dramatic . . . devastating commentary on the perilous nature of the nuclear arms race.”
-Houston Chronicle

“Intriguing insight . . . Rhodes masterfully dissects decades of what he considers reckless and misguided policy decisions that led the United States and the Soviet Union to expand their nuclear arsenals beyond all logic . . . The author’s deftly painted character portraits–he mentions Gorbachev’s “southern Russian accent and hillbilly grammar”–make for an engrossing narrative.”
-The American Heritage

“With skillful insight, Richard Rhodes has woven accounts by Soviet and American insiders into a dark and troubling history of superpower insanity. He makes you wonder when we'll wake up, since some of the American villains keep coming back to haunt us: Cheney, Rumsfeld, Wolfowitz, Perle.”
-David Shipler, Russia: Broken Idols, Solemn Dreams

“Richard Rhodes, our leading historian of nuclear weapons, has written a powerful, clear-eyed account of the nuclear arms race, focusing on Mikhail Gorbachev as the heroic figure in the history of mankind’s 20th Century flirtation with oblivion. Rhodes gives the still-neglected happy ending to that flirtation the sweeping, insightful, and compelling treatment it deserves. So yes, this is an “important” book, but it reads like a political thriller.”
-Robert G. Kaiser, Why Gorbachev Happened

"Rhodes accomplishes what neither American nor Soviet political cultures could manage over a half-century of nuclear cold war–to find the flesh-and-blood human reality on both sides. Rich with revelation, insight and detail, riveting as a powerful novel, Arsenals of Folly is transcendent history, haunting our memory and experience."
-Roger Morris, Partners in Power: The Clintons and Their America