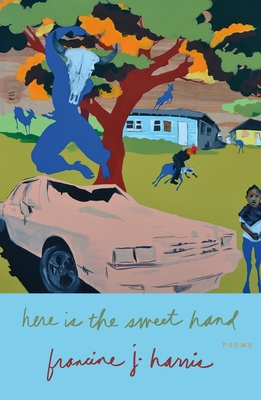 WINNER OF THE 2020 NATIONAL BOOK CRITICS CIRCLE AWARD IN POETRY

The poems in Here is the Sweet Hand explore solitude as a way of seeing. In particular, the speakers in francine j. harris’ third collection explore the mystique, and myth, of female loneliness as it relates to blackness, aging, landscape and artistic tradition.

The speakers in these poems are often protagonists. Against the backdrop of numerous American cities and towns, and in a time of political uncertainty, they are heroines in their quest to find logic through their own sense of the world.

The poems here are interested in the power of observation. But if there is authority in the individual versus the collective, Here is the Sweet Hand also poses questions about the source of that power, or where it may lead.

As in her acclaimed previous collections, harris’ skillful use of imagery and experimentation with the boundaries of language set the stage for unorthodox election commemoration, subway panic, zoomorphism, and linguistic battlefields. From poems in dialogue with the artistry of Toni Morrison and Charles Burnett to poems that wrestle with the moods of Frank Stanford and Ty Dolla $ign, the speakers in this book signal a turn at once inward and opening.

francine j. harris is the author of play dead, winner of the Lambda Literary and Audre Lorde Awards and a finalist for the Hurston/Wright Legacy Award. Her first collection, allegiance, was a finalist for the Kate Tufts Discovery and PEN Open Book Awards. Originally from Detroit, she has received fellowships from the National Endowment for the Arts, the MacDowell Colony, and the Cullman Center for Scholars and Writers at the New York Public Library. She is an associate professor of English at the University of Houston.

"Entering mid-career with her extraordinary third book, harris . . . fully emerges as one of the best and most relevant contemporary poets. She writes with a historical and linguistic reach . . . She is also in league with some of the great practitioners of poetry that makes no distinction between the personal and the political, such as Gwendolyn Brooks, Robert Hayden, and Adrienne Rich." —Craig Morgan Teicher, NPR

"harris reveals one of the roles of the contemporary poet: to expose unpleasant truths of the past and present, to call out the aspects of our worst selves . . . harris is an expert practitioner and guide; we are always in her orbit, captivated as she manipulates language, un-doing worn traditions, engaging the reader intimately, and unforgettably." —Mandana Chaffa, Chicago Review of Books

"francine j. harris has fashioned a striking new idiom in American poetry . . .Her distinctive line is propelled by its own music—by which I mean harris has created an effect in which the line seems to be assembling itself as it goes, improvising as it overhears the sonic entailments of what’s just been written, or said . . . In her poems, ecstasy is always peaking into history, and vice versa; the green world spurts irresistibly up from the gray; and sex and language come curled intimately, boisterously, around each other." —Noah Warren, Kenyon Review

"Some of the poems are so full of heat, so pressing, that you’ll hold your breath until the last line." —goop

"This is a book full of 'heat,' of being beneath and being above, of desire, neighbors, the news, the horrors of systemic racism played out in a 19th-century orphanage and a shooting on a train — all presented without the censoring influence of traditional continuity . . . there is no point in questioning Here Is the Sweet Hand. It is better to let her voice be the center and take pleasure in change." —Lynn McGee, Lambda Literary

"harris's poems teem with emotion, but there’s a control to her lines that feels so clever . . . harris is original in syntax and rhythm: the poems in this collection never play quite the same song, as if their form keeps us active and alert." —Nick Ripatrazone, The Millions

"[harris] injects her work with lyrical strength that is poignant and powerful." —Karla Strand, Ms. Magazine