The Electric Woman: A Memoir in Death-Defying Acts (Paperback) 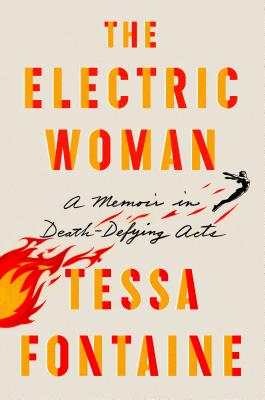 “This is the story of a daughter and her mother. It’s also a memoir, a love story, and a tale of high-flying stunts . . . An adventure toward and through fear.” —Southern Living

Tessa Fontaine’s astonishing memoir of pushing past fear, The Electric Woman, follows the author on a life-affirming journey of loss and self-discovery—through her time on the road with the last traveling American sideshow and her relationship with an adventurous, spirited mother.

Turns out, one lesson applies to living through illness, keeping the show on the road, letting go of the person you love most, and eating fire:

The trick is there is no trick.
You eat fire by eating fire.

Two journeys—a daughter’s and a mother’s—bear witness to this lesson in The Electric Woman.

For three years Tessa Fontaine lived in a constant state of emergency as her mother battled stroke after stroke. But hospitals, wheelchairs, and loss of language couldn’t hold back such a woman; she and her husband would see Italy together, come what may. Thus Fontaine became free to follow her own piper, a literal giant inviting her to “come play” in the World of Wonders, America’s last traveling sideshow. How could she resist?

Transformed into an escape artist, a snake charmer, and a high-voltage Electra, Fontaine witnessed the marvels of carnival life: intense camaraderie and heartbreak, the guilty thrill of hard-earned cash exchanged for a peek into the impossible, and, most marvelous of all, the stories carnival folks tell about themselves. Through these, Fontaine trained her body to ignore fear and learned how to keep her heart open in the face of loss.

A story for anyone who has ever imagined running away with the circus, wanted to be someone else, or wanted a loved one to live forever, The Electric Woman is ultimately about death-defying acts of all kinds, especially that ever constant: good old-fashioned unconditional love.

Tessa Fontaine’s writing has appeared in PANK, Seneca Review, The Rumpus, Sideshow World, and elsewhere. She holds an MFA from the University of Alabama and is working on a PhD in creative writing at the University of Utah. She also eats fire and charms snakes, among other sideshow feats. She lives in South Carolina. The Electric Woman is her first book.

"An assured debut that doesn’t shy away from the task of holding the ordinary and otherworldly in its hand, at once. It’s herein that the book’s power lies . . . Throughout this narrative is the story of [Fontaine's] relationship with her mother, a story that is sometimes its own hard-to-watch sideshow act. Fontaine is unafraid to write the ugliness — the imperfect care and love — that takes place between people, and the memoir is most 'electric' when it doesn’t shy from that imperfection . . ." —Rachel Khong, The New York Times Book Review

"While caring for her mother following a stroke, Tessa Fontaine became enchanted by the world of the carnival sideshow, learning to charm snakes, swallow swords, and escape handcuffs. What Fontaine finds, as she recounts in her fascinating memoir, The Electric Woman (FSG), is that there's no trick to overcoming one's deepest fears." —Vogue

"This is a fascinating, moving memoir about growing up and facing loss, and it also serves as a look behind the scenes at the circus." —BookPage

"This is the story of a daughter and her mother. It’s also a memoir, a love story, and a tale of high-flying stunts. It recounts an adventure toward and through fear as Tessa Fontaine performs as an escape artist, fire-eater, and snake charmer with the World of Wonders, a traveling sideshow." —Southern Living

"Marvellous . . . [Fontaine's] account of her coming-of-age summer on the road is filled with small miracles." —BBC

"Vivid and hallucinatory, joyful and disturbing—one of the most creative memoirs I’ve encountered." —Susannah Cahalan, The New York Post

"Chronicles of Fontaine’s frequently strange experiences with the carnival are interspersed with poignant reflections on the bonds shared by mother and daughter." —San Francisco Chronicle

"The Electric Woman is a story of loss, love and acceptance, of learning to overcome one's fears and insecurities and of letting go of what was in order to accept what is. She shows readers how to live each day to the fullest despite obstacles—or perhaps, because of them." —Shelf Awareness

"If you've ever dreamed of running away to join the circus, this is the book you need to read." —Patch

"After her mother suffered a terrible stroke, leaving her severely incapacitated, the author ran off to join the circus, where she ate fire, handled a boa constrictor and even swallowed swords. Fontaine braids these experiences, of losing her mother and performing in a sideshow, into an elegant narrative." —Watertown Daily Times

"Honest and emotionally vulnerable . . . In this memoir that seamlessly balances grief, loss and wild-eyed determination, Fontaine makes a compelling case for using fear as an unexpected gift."
—BookPage

"A fascinating behind-the-scenes peek at carnival life, and an ode to unconditional love." —Erin Kodicek, Omnivoracious

"Fontaine smashes together two distinct memoirs, one focused on grieving her mother’s prolonged illness and death, the other her unlikely, brave’n’crazy season as a small-time carnival performer . . . As exciting as the snake handling, card tricks, and “secret rituals” of the carnival’s insides are, it is the grinding journey of mom-grief that will resonate with readers . . . Take a walk on the wild side, why dontcha?"
—Library Journal

“In a word: wow. I read The Electric Woman in a hallucinatory fever filled with hospital beds and carnival rides, gray eyes and biting boa constrictors, brain bleeds and headless bodies, fire eaters and electrified women. Tessa Fontaine is a real-life snake charmer—her writing hooked and hypnotized me from page one. I had to read just one more chapter, just one more until I reached the end of her extraordinary memoir, dismayed that it was over but so grateful for the unforgettable ride.”
—Susannah Cahalan, author of Brain on Fire

“Somewhere between knives and fire beats the heart of a young woman daring herself to live. In her memoir, The Electric Woman, Tessa Fontaine weaves her way through a mother-death story and a daughter-coming-alive story against the backdrop of America’s last traveling sideshow. There are so many ways to bring ourselves back to life. So many people along the way who become our secular guardian angels. This story is a breathtaking, fire-eating, heart-stopping, death-defying thrill.”
—Lidia Yuknavitch, author of The Book of Joan

“This is a memoir like no other. One in which reinvention means starting out as a heartbroken girl and becoming a fire eater, a snake charmer, an escape artist, an electric woman. These are not metaphors, and yet again they are: expertly developed, sustained, and revealed in intensifying and sometimes terrifying complexity, as Tessa Fontaine enters, embraces, and finally allows herself to be transformed by the carnival’s World of Wonders and the unforgettable cast of characters who calls the sideshow home.”
—Pam Houston, author of Contents May Have Shifted

“Yes, I have done it. I have run away to the circus, a realm of wonder, harsh reality, and colorful characters, vividly described by a remarkable writer who pulls off her own high-wire act with honesty and abandon, moving from loss to delight. In The Electric Woman, Tessa Fontaine is an escape artist determined to detonate the grim reality of mere existence, taking us on the most original journey I can remember in a recent memoir. As she moves through guises and adventures, she learns how to become the woman her mother loves and the person she didn’t think she could be: her own marvelous self.”
—George Hodgman, author of Bettyville

“A beautiful and ferocious book, The Electric Woman comes packed with magnificent stories of carnival tricks, transcending the limits of the body, and the bravery of survivors and caretakers. Yet, somehow no marvel is more wondrous than the writing itself. Fontaine's memoir is a brilliant testament to family, grief, love, and the astonishing trick of being—and feeling—alive.”
—Annie Hartnett, author of Rabbit Cake

“The Electric Woman is a love story, a coming-of-age, a brilliant exploration of discovery by a young woman ultimately set free by the flames of fire.”
—Leslie Zemeckis, author of Goddess of Love Incarnate

“With fearless grace and piercing intensity, Tessa Fontaine juxtaposes the thrill of eating fire with the luminous mystery of her mother’s devastating strokes and harrowing transformations. I have never read a book more tender or more true. We all live in a World of Wonders, a world of terror. The Electric Woman delivers us to the potent mercy of unmitigated love, the passion of shared suffering, the resilience of the spirit, and the ecstasies of our transfigurations. The heart breaks, and breaks open—in the divine light of despair, we discover radiant joy: the hidden holiness of every breath, every being, every moment.”
—Melanie Rae Thon, author of Sweet Hearts