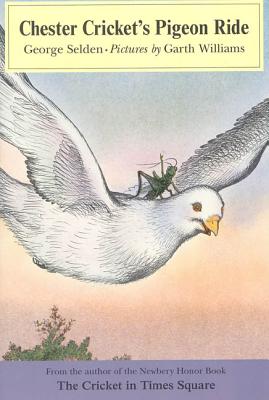 This is book number 4 in the Chester Cricket and His Friends series.

Chester Cricket--the famous cricket in Times Square--is homesick. When his friend Mario takes him to a sky show at the Planetarium, Chester realizes how much he misses seeing real stars at night.

Happily, he finds his way out of the subway into Times Square, where he meets a new friend, Lulu Pigeon. Lulu takes him on a trip beyond his wildest dreams. From Central Park to the top of the Empire State Building, from the Statue of Liberty and back to Times Square, Chester sees Manhattan in style--and even finds a little bit of country in the city!

George Selden (1929-1989) was the author of A Cricket in Times Square, winner of the 1961 Newbery Honor and a timeless children's classic. Born in Hartford, Connecticut, Selden received his B.A. from Yale, where he was a member of the Elizabethan Club and contributed to the literary magazine. He spent three summer sessions at Columbia University and, after college, studied for a year in Rome on a Fulbright Scholarship. People often asked Selden how he got the idea for The Cricket in Times Square. "One night I was coming home on the subway, and I did hear a cricket chirp in the Times Square subway station. The story formed in my mind within minutes. An author is very thankful for minutes like those, although they happen all too infrequently." The popular Cricket series grew to seven titles, including Tucker's Countryside and The Old Meadow. In 1973, The Cricket in Times Square was made into an animated film. Selden wrote more than fifteen books, as well as two plays. His storytelling blends the marvelous with the commonplace realities of life, and it was essential to him that his animal characters display true emotions and feelings.

Garth Williams (1912-96) illustrated all seven of the Chester Cricket books and many other works, including Stuart Little and Charlotte's Web.

“Chester, a country cricket who misses stargazing during his stay in the city, takes a breathtaking ride with new friend Lulu Pigeon over New York. Descriptions of Central Park and Times Square are evocative . . . Full-page pen-and-ink drawings are panoramic and most vibrant when depicting the familiar Chester, Harry Cat, and Tucker.” —Booklist

“Thoughtful but unpretentious, humorous without more cleverness, this is nothing less than a good story, well told and sympathetically illustrated.” —School Library Journal