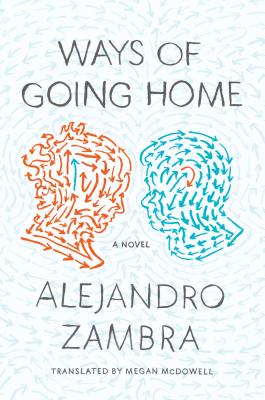 By Alejandro Zambra, Megan McDowell (Translator)
Not available to order
Stock uncertain--should fulfill within 10 days or so

Alejandro Zambra's "Ways of Going Home "begins with an earthquake, seen through the eyes of an unnamed nine-year-old boy who lives in an undistinguished middleclass housing development in a suburb of Santiago, Chile. When the neighbors camp out overnight, the protagonist gets his first glimpse of Claudia, an older girl who asks him to spy on her uncle Raul.

In the second section, the protagonist is the writer of the story begun in the first section. His father is a man of few words who claims to be apolitical but who quietly sympathized to what degree, the author isn't sure with the Pinochet regime. His reflections on the progress of the novel and on his own life which is strikingly similar to the life of his novel's protagonist expose the raw suture of fiction and reality.

"Ways of Going Home s"witches between author and character, past and present, reflecting with melancholy and rage on the history of a nation and on a generation born too late the generation which, as the author-narrator puts it, learned to read and write while their parents became accomplices or victims. It is the most personal novel to date from Zambra, the most important Chilean author since Roberto Bolano.

Alejandro Zambra is a poet, novelist, and literary critic who was born in Santiago, Chile, in 1975. He is the author of two previous novels, "The Private Lives of Trees "and "Bonsai," which was awarded a Chilean Critics Award for best novel. He was selected as one of "Granta"'s Best of Young Spanish-Language Novelists and was elected to the Bogota39 list.Megan McDowell is a literary translator living in Zurich, Switzerland. She also translated Alejandro Zambra's "The Private Lives of Trees.""

“Even IKEA doesn’t make so much of so little space as does this young Chilean novelist. His latest book revolves around a quartet of chapters, woven around one thread about a young boy growing up in the Pinochet years and another of the novelist writing his story. In many ways, the book recalls the miniature roominess Philip Roth achieved in his great novel, The Ghost Writer. The stories we tell imagine us as much as us them, Zambra reminds, with the power and intensity of a writer who grew up in the shadow of a terrible war.” —John Freeman, The Boston Globe

“Funny, contemplative, and quietly moving, Ways of Going Home pulls off the intoxicating trick of making the world feel smaller in its familiar touchstones found in a time of unique tragedy.”—Chris Barton, The Los Angeles Times

“[Zambra’s novels] are written with startling talent. And Zambra’s latest novel represents, I think, his deepest achievement . . . 'We go home,' Zambra writes, 'and it's as if we were returning from war, but from a war that isn't over.' This is the giant, poignant condition staged by the novel's playful doubleness—the way the best conjuring trick is the one where you're shown how it's done, which in no way contradicts your belief that what you've seen is magic.”—Adam Thirlwell, The New York Times Book Review

“A fascinating reflection on historical complicity, translated with restrained elegance by Megan McDowell.” —The Financial Times

“I read all of Alejandro Zambra’s novels back-to-back because they were such good company. His books are like a phone call in the middle of the night from an old friend, and afterward, I missed the charming and funny voice on the other end, with its strange and beautiful stories.” —Nicole Krauss, author of Great House

“In Alejandro Zambra, the poet and novelist are organically fused. Nearly every line startles in one way or another, always propelling the story forward toward a complete emotional journey. Ways of Going Home is compact, intimate, but also sweeping—and Zambra is amazing!” —Francisco Goldman, author of Say Her Name

“Alejandro Zambra is one of the writers of my generation whom I most admire. Never a wasted word. Never a false note. His is an utterly unique voice, one I go back to again and again.” —Daniel Alarcón, author of Lost City Radio

“I envy Alejandro the obvious sophistication and exquisite beauty of the pages you are about to read, a work which is filled with the heartfelt vulnerability of testimony. I loved it and I read it with the great joy of anticipation that one has reading a writer one hopes to read more and more of in the future.” —Edwidge Danticat, Granta

“Alejandro Zambra belongs to that rare species of writer who brings language back to life. The strength of Ways of Going Home, its potency, is in the way it unfolds language in order to place its readers at that almost ungraspable intersection between individual and collective history.” —Valeria Luiselli, author of Faces in the Crowd

“Complex yet sophisticated, [Ways of Going Home] places Zambra at the spearhead of a new Chilean fiction and sets him alongside other Latin American writers such as Colombia’s Juan Gabriel Vasquez, who weave some of the continent’s most difficult historical themes into an exciting modern art form.” —Mina Holand, The Observer

“Rising through the ranks of Latin American literature is Alejandro Zambra, a writer from Chile who has won over critics with his captivating work . . . Thought-provoking and inspiring, [Ways of Going Home] also echoes some of the author’s own nostalgia of growing up during that turbulent time.” —Abi Jackson, Manchester Evening News