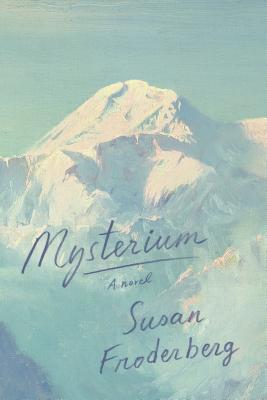 By Susan Froderberg
$28.60
NOT on our shelves now. Usually ships from warehouse in several days.

Inspired by the true story of Nanda Devi Unsoeld’s tragic 1976 death while climbing her namesake mountain, Susan Froderberg’s novel Mysterium tells the tale of a courageous woman’s ascent to the summit of India’s highest peak to honor her fallen mother.

Mysterium, known as Mount Sarasvati, looms over the Indian Himalayas as the range’s tallest peak in the dazzling fictional world Susan Froderberg has created.

Sarasvati “Sara” Troy is determined to reach the peak for which she was christened, and to climb it in honor of her mother, who perished in a mountaineering accident when Sara was just a child. She asks her father, a celebrated mountaineer and philosophy professor, to organize and lead the expedition.The six climbers he recruits are an uneasy mix. They include his longtime friend Dr. Arun Reddy, a recent widower, and Reddy’s son, who often challenges his father; Wilder Carson, the acclaimed climber who is tormented by the death of his brother; Wilder’s wife, Vida, a former lover of Dr. Reddy; and the distinguished scholar of climbing Virgil Adams and his wife, Hillary. Porters and Sherpas are recruited in India to assist and be part of the team.

The party’s journey is harrowing, taking them from the mountain’s gorge, into its sanctuary, and finally onto the summit, a path that evokes the hell, purgatory, and heaven of Dante’s Inferno. As the air thins and this unforgettable journey unfolds, Sara emerges as a Beatrice-like figure, buoying her companions up the mountain through the sheer strength and beauty of her being. Both monumental quest and dreamlike odyssey, Mysterium is infused with the language of climbing and profound existential insight.

Susan Froderberg is the author of Old Border Road, published in 2010 by Little, Brown and hailed by the Los Angeles Times as a “remarkable debut novel.” Her fiction has appeared in Alaska Quarterly Review, Antioch Review, Conjunctions and others. She worked for several years as a critical care nurse in Seattle before moving East to study medical ethics and philosophy at Columbia University, where she received her PhD. She and her husband split their time between Seattle and New York City.

"Must-read . . . [Mysterium] ascends, literally and figuratively, vividly capturing the outer edge of physical, mental, emotional and spiritual travail . . . Froderberg has carefully contemplated body, soul and their fragile nexus. That pays off superbly as the air thins, and the surrealism of the terrain, the hallucinatory wanderings of oxygen-robbed brains and the discomfiture of sapped bodies converge cinematically." --Alexander C. Kafka, The Washington Post

"Ms. Froderberg knows all the ins and outs of climbing culture and her narrative is packed with the terrifying dangers . . . Mysterium re-creates the elegance and lofty religiosity of Victorian-era travelogues . . . Mysterium conveys the foolhardiness and sublimity of extreme climbing, which renders human life so breathtakingly small and fragile." --Sam Sacks, The Wall Street Journal

"Froderberg has a firm grasp on the technical aspects of climbing, as well as its many dangers . . . The book offers the unusual combination of an intellectual challenge coupled with a brutal but ecstatic story." --Publishers Weekly

"Froderberg peppers the novel with vibrant descriptions of the Indian subcontinent and weaves them in with contemplative takeaways about the sport of climbing . . . The harrowing adventure is ultimately suspenseful and nerve-racking, and the shifting emotional dynamics between the various members of the group efficiently spin a compelling story." --Booklist