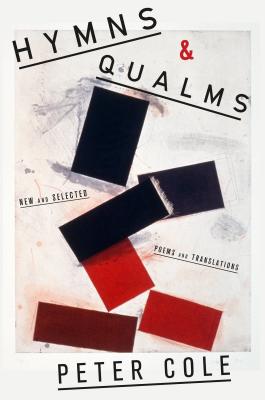 Hymns & Qualms brings together MacArthur Fellow Peter Cole’s acclaimed poetry and translations, weaving them into a helical whole. Praised for his “prosodic mastery” and “keen moral intelligence” (American Poets), and for the “rigor, vigor, joy, and wit” of his poetry (The Paris Review), Cole has created a vital, unclassifiable body of work that plumbs centuries of wisdom while paying sharp attention to the textures and tensions of the present. He is, Harold Bloom writes, “a matchless translator and one of the handful of authentic poets in his own American generation. Hymns & Qualms is a majestic work, a chronicle of the imaginative life of a profoundly spiritual consciousness.”

Cole is a maker—of poems and worlds. From his earliest registrations of the Jerusalem landscape’s stark power to electric renderings of mystical medieval Hebrew hymns; from his kabbalistically inspired recent poems to sensuous versions of masterworks of Muslim Spain; and from his provocative presentation of contemporary poetry from Palestine and Israel to his own dazzling reckonings with politics, beauty, and the double-edged dynamic of influence, Cole offers a ramifying vision of connectedness. In the process, he defies traditional distinctions between new and old, familiar and foreign, translation and original—“as though,” in his own words, “living itself were an endless translation.”

Peter Cole was born in Paterson, New Jersey, in 1957. He has published several books of poems and many volumes of translations from Hebrew and Arabic, both medieval and modern, including Hymns & Qualms, and The Dream of the Poem. He has received numerous honors for his work, including a Guggenheim Fellowship and an American Academy of Arts and Letters Award in Literature, and in 2007 he was named a MacArthur Fellow. He divides his time between Jerusalem and New Haven.

“I love this book-for its idiosyncratic music, its moral and spiritual intelligence, and the balance it maintains between pain and joy, provocation and solace. People are always asking, What’s the point of poetry when the world is going to hell? Hymns & Qualms is a potent reply.”
—Christian Wiman

“Hymns & Qualms is a majestic work, a chronicle of the imaginative life of a profoundly spiritual consciousness.”
—Harold Bloom

“Peter Cole sings like nobody else in English today, his ear attuned to the prosodies of classical Arabic and the Hebrew lyrics of al-Andalus. In his poetry we hear shards of that ‘pure language’ which, according to Benjamin, arises when languages come together—and apart—in translation. Every rift of these Hymns & Qualms is loaded with ore.”
—Richard Sieburth

“Cole is a writer of deeply textured poems . . . His rhythms surprise, his forms feel simultaneously fresh and archaic . . . It’s tempting to think of him as one of his beloved Jewish Andalusian [poets] reborn in our time.”
—Greer Mansfield, Bookslut

“Peter Cole’s work is an entire revelation: a body of lyric and didactic verse so intense, so intelligent, and so vivid that it appears to identify a whole dimension of historical consciousness previously unavailable to us. His work represents the finest labor of poetic translation that I have seen in many years.”
—Richard Howard