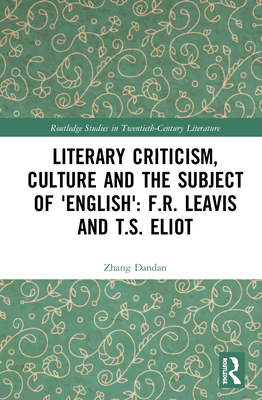 This volume considers the highly convoluted relationship between F. R. Leavis and T. S. Eliot, comparing their ideas in literary and cultural criticism, and connecting it to the broader discourse of English Studies as a university subject that developed in the first half of the twentieth century. Comparing and contrasting all the many writings of Leavis on Eliot, and the two on Lawrence, the study examines how Eliot is formative for the theory and practice of Leavis's literary criticism in both positive and negative ways, and investigates Lawrence's significance in relation to Leavis's changing attitude to Eliot. It also examines how profound differences in social, cultural, religious and national thinking strengthened Leavis's alliance with Lawrence to the detriment of his relationship with Eliot. These differences between the two writers are presented as dichotomies between nationalism and Europeanism/internationalism, ruralism/organicism and industrialism/metropolitanism, and relate to the two men's views on literary education, the subject of 'English' and the position of the Classics in the curriculum. It explores how Leavis's increasingly conflicted feelings about a figure to whom he owned an enormous critical debt and inspiration, but whose various beliefs and literary affiliations caused him much misgiving, result in a deep sense of division in Leavis himself which he sought to transfer onto Eliot as what he called a pathological 'case'.

Dandan Zhang is a post-doctoral researcher at Shanghai Jiao Tong University. She received her PhD in English Literature from the University of Birmingham in 2018. She has previously published essays on Leavis and Eliot in Chinese and English languages.