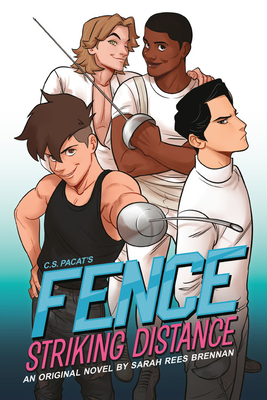 The boys of Kings Row bout with drama, rivalry, and romance in this original YA novel by The New York Times bestselling author Sarah Rees Brennan — inspired by the award-nominated comic series by C.S. Pacat and Johanna The Mad. Sixteen-year-old Nicholas Cox is the illegitimate son of a retired fencing champion who dreams of getting the proper training he could never afford. After earning a place on the elite Kings Row fencing team, Nicholas must prove himself to his rival, Seiji Katayma, and navigate the clashes, friendships, and relationships between his teammates on the road to state championships -- where Nicholas might finally have the chance to spar with his golden-boy half-brother. Coach Williams decides to take advantage of the boys' morale after a recent victory and assigns them a course of team building exercises to further deepen their bonds. It takes a shoplifting scandal, a couple of moonlit forest strolls, several hilariously bad dates, and a whole lot of introspection for the team to realize they are stronger together than they could ever be apart. The first installment of this enticing original YA novel series by Sarah Rees Brennan, rich with casual diversity and queer self-discovery, explores never-before-seen drama inspired by C.S. Pacat's critically acclaimed Fence comic series and boasts original cover and interior art by Johanna The Mad. Text and Illustration copyright: © 2020 BOOM! StudiosFence(TM) and © 2020 C.S. Pacat

Sarah Rees Brennan is the No. 1 New York Times bestselling YA author of over a dozen books, both solo and co-written with authors including Kelly Link and Maureen Johnson. She was long-listed for the Carnegie for her first novel. She was born in Ireland by the sea and lives there now in the shadow of a cathedral, where she's working on--among other things--her series of tie-in novels with the hit Netflix show The Chilling Adventures of Sabrina. Her most recent standalone novel, In Other Lands, is a tale of love, friendship and wings starring the crankiest boy to ever stumble into a magic land and was a Lodestar Award and Mythopoeic Award finalist.
Johanna The Mad is a Mexican digital artist and illustrator currently working on the sports comic series Fence (nominated for a GLAAD award under the "Outstanding Comic Book" category).

Praise for Fence: Striking Distance:One of Buzzfeed's 10 Young Adult Books to Read Just in Time For the 2020 OlympicsOne of BookRiot's Summer 2020 YA Books: Your Reading List is Hot, Hot, Hot!
"Queer-affirming.... Fans of C.S. Pacat's graphic series Fence may wish to reenter this world in novel form."—Kirkus

Part sports story, part romance, this novelization of C. S. "Pacat's comic series is a laugh-out-loud funny dive into camaraderie and identity.... A satisfying but open ending will leave readers eager for the next installation in this worthy adaptation."—Booklist

"Brennan plops the reader into the 'Fence' universe without a backward look and darts forward with admirable speed.... Romance and comedy compete for top billin.... A solid buy where the graphic novel series is popular, or for libraries looking for a fun book to bump up their LGBTQ+ selections."—School Library Journal