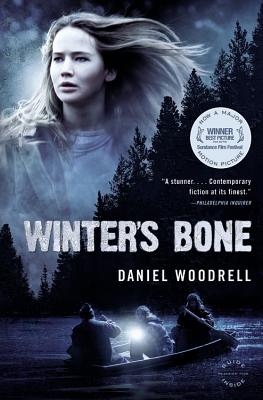 Ree Dolly's father has skipped bail on charges that he ran a crystal meth lab, and the Dollys will lose their house if he doesn't show up for his next court date. With two young brothers depending on her, 16-year-old Ree knows she has to bring her father back, dead or alive. Living in the harsh poverty of the Ozarks, Ree learns quickly that asking questions of the rough Dolly clan can be a fatal mistake. But, as an unsettling revelation lurks, Ree discovers unforeseen depths in herself and in a family network that protects its own at any cost.

"The lineage from Faulkner to Woodrell runs as deep and true as an Ozark stream in this book...his most profound and haunting yet." -- Los Angeles Times Book Review

Five of Daniel Woodrell's published novels were selected as New York Times Notable Books of the Year. Tomato Red won the PEN West Award for the Novel in 1999. Woodrell lives in the Ozarks near the Arkansas line with his wife, Katie Estill.

"Woodrell's Old Testament prose and blunt
vision have a chilly timelessness that
suggests this novel will speak to readers as
long as there are readers."—David Bowman, New York Times Book Review

"Heroines this inspiring don't come along
often. When they do, they deserve our
attention."—Vick Boughton, People

"The plot of WINTER'S BONE is
uncomplicated, yet it packs a kind of
biblical, Old West, Cormac McCarthy
wallop--hard and deep."—Michael Heaton, Cleveland Plain Dealer