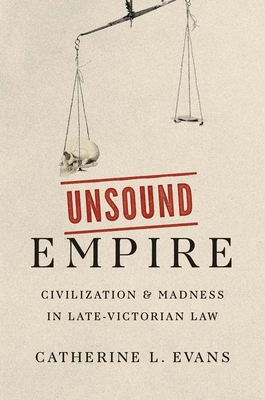 By Catherine L. Evans
Not available to order

Unsound Empire is a history of criminal responsibility in the nineteenth‑century British Empire told through detailed accounts of homicide cases across three continents. If a defendant in a murder trial was going to hang, he or she had to deserve it. Establishing the mental element of guilt—criminal responsibility—transformed state violence into law. And yet, to the consternation of officials in Britain and beyond, experts in new scientific fields posited that insanity was widespread and growing, and evolutionary theories suggested that wide swaths of humanity lacked the self‑control and understanding that common law demanded. Could it be fair to punish mentally ill or allegedly “uncivilized” people? Could British civilization survive if killers avoided the noose?

Catherine Evans is assistant professor at the Centre for Criminology and Sociolegal Studies at the University of Toronto.

Shortlisted for the Stansky Book Prize, sponsored by the North American Conference on British Studies ( NACBS)


“Unsound Empire reconnoitres with late-Victorian jurists and medical men struggling with prisoners too dangerous to release and too mad to hang.  Catherine Evans’s micro-histories are strewn with eccentric characters and thick with tales that sparkle with stunning prose.”—Constance Backhouse, University of Ottawa


“This original, bold and beautifully crafted book brings legal history, the history of medicine and imperial history into dialogue. A must-read for anyone interested in a critical history of the British Empire.”—Renaud Morieux, author of The Society of Prisoners. Anglo-French Wars and Incarceration in the Eighteenth Century


“Deeply researched and grippingly written, Unsound Empire, demonstrates the centrality of imperial rule to the making of the common law and of legal competence to the emergence of political subjecthood, fundamentally transforming histories of law, medicine, and empire.”—Rohit De, author of A People’s Constitution: The Everyday Life of Law in the Indian Republic