Calamity: The Many Lives of Calamity Jane (Hardcover) 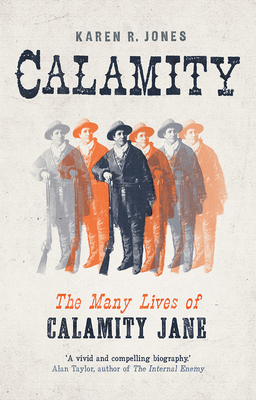 A fascinating new account of the life and legend of the Wild West’s most notorious woman: Calamity Jane

Martha Jane Canary, popularly known as Calamity Jane, was the pistol-packing, rootin’ tootin’ “lady wildcat” of the American West. Brave and resourceful, she held her own with the men of America’s most colorful era and became a celebrity both in her own right and through her association with the likes of Wild Bill Hickok and Buffalo Bill Cody.

In this engaging account, Karen Jones takes a fresh look at the story of this iconic frontierswoman. She pieces together what is known of Canary’s life and shows how a rough and itinerant lifestyle paved the way for the scattergun, alcohol-fueled heroics that dominated Canary’s career. Spanning Canary’s rise from humble origins to her role as “heroine of the plains” and the embellishment of her image over subsequent decades, Jones shows her to be feisty, eccentric, transgressive—and very much complicit in the making of the myth that was Calamity Jane.

Karen Jones is a professor at the University of Kent. Her previous publications include Wolf Mountains: A History of Wolves Along the Great Divide, The Invention of the Park, and Epiphany in the Wilderness: Hunting, Nature, and Performance in the Nineteenth-Century American West.

"In this vivid and compelling biography, Karen Jones recovers the remarkable creativity of Martha Jane Canary, who helped to invent the mythic West by reinventing herself.  As Calamity Jane, she told wild tales of adventure and blurred the lines between legend and history, male and female, and truth and possibility."—Alan Taylor, author of The Internal Enemy
“Tells a great story. Lively, engaging, and timely, Calamity is guaranteed to thrill and entertain in the mode of its sensational subject.”—Rachel Adams, author of Sideshow U.S.A.
“This lucid and lively book offers an absorbing portrayal of a remarkable woman in the American West.”—Sarah M. S. Pearsall, author of Atlantic Families
“A fast-paced tour through a Western landscape populated with memorable characters, many of them long-forgotten.” —Laura Browder, author of Her Best Shot