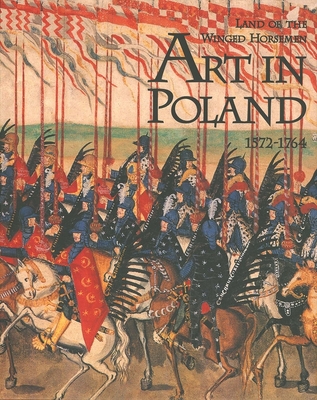 In its golden years of the Baroque era, Poland expressed creative ties to east and west in extraordinary works of fine and decorative art. This gorgeously illustrated book displays more than 150 works of art that celebrate the cross-cultural richness of Poland’s creative output during this period. From the dramatic uniform of the winged Hussar complete with feathers and leopard skin to traditional portraits of royalty to a Turkish-style beverage service, these splendid objects represent Poland’s diversity and breadth at a time when it was the largest land empire in Europe, stretching from the Baltic to the Black Sea.

The book addresses five areas of Polish culture in the sixteenth through eighteenth centuries. The first section on the monarchy features objects relating to the kings who ruled during the period. The second section of the book is devoted to the magnate class and the objects that were typically seen in a nobleman’s home. The third part presents religious artworks, highlighted by an important seventeenth-century painting of Our Lady of Czestochowa. The section on the military, focusing on the cavalry, offers highly decorated battle regalia, weapons, and a Turkish tent. With gilded cups, clocks, decanters, and more, the decorative arts section of the book provides outstanding examples of the cross-cultural tenor of the Baroque era. The volume includes essays that set the art of Poland in the context of its history, geography, and culture; a timeline of major events; a map of the Polish Commonwealth; a glossary; a useful bibliography; and an index of exhibited works.

This book is the catalogue for a major exhibition that will be shown at the Walters Art Gallery in Baltimore March 2– May 9, 1999. The exhibit then travels to the Art Institute of Chicago, the Huntsville Museum of Art, the San Diego Museum of Art, the Philbrook Museum of Art, and concludes at the Royal Castle in Warsaw, Poland, in the summer of 2000.

The exhibition is organized and circulated by Art Services International in cooperation with the Walters Art Gallery.

Jan K. Ostrowski is director of the Wawel Royal Castle Museum in Kracow and professor at the Institute of Art History at Jagiellonian University.