Twilight of the American Century (Paperback) 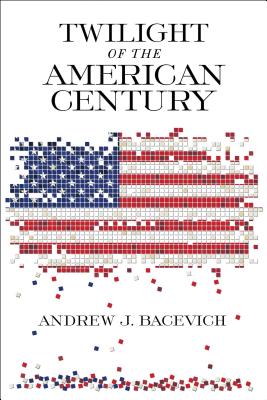 By Andrew J. Bacevich
$25.00
ON HAND in at least ONE of our stores. Click through or call for up-to-the-minute availability.

Andrew Bacevich is a leading American public intellectual, writing in the fields of culture and politics with particular attention to war and America's role in the world. Twilight of the American Century is a collection of his selected essays written since 9/11. In these essays, Bacevich critically examines the U.S. response to the events of September 2001, as they have played out in the years since, radically affecting the way Americans see themselves and their nation's place in the world.

Bacevich is the author of nearly a dozen books and contributes to a wide variety of publications, including Foreign Affairs, The Nation, Commonweal, Harper's, and the London Review of Books. His op-eds have appeared in the New York Times, Washington Post, and the Wall Street Journal, among other newspapers. Prior to becoming an academic, he was a professional soldier. His experience as an Army officer informs his abiding concern regarding the misuse of American military power and the shortcomings of the U.S. military system. As a historian, he has tried to see the past differently, thereby making it usable to the present.

Bacevich combines the perspective of a scholar with the background of a practitioner. His views defy neat categorization as either liberal or conservative. He belongs to no "school." His voice and his views are distinctive, provocative, and refreshing. Those with a focus on political and cultural developments and who have a critical interest in America's role in the world will be keenly interested in this book.