The Anthropocene Cookbook: Recipes and Opportunities for Future Catastrophes (Hardcover) 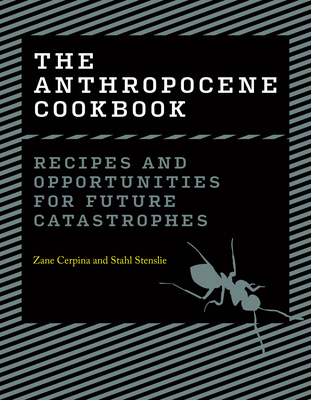 More than sixty speculative art and design projects explore how art, food, and creative thinking can prepare us for future catastrophes.

In the Age of the Anthropocene—an era characterized by human-caused climate disaster—catastrophes and dystopias loom. The Anthropocene Cookbook takes our planetary state of emergency as an opportunity to seize the moment to imagine constructive change and new ideas. How can we survive in an age of constant environmental crises? How can we thrive? The Anthropocene Cookbook answers these questions by presenting a series of investigative art and design projects that explore how art, food, and creative thinking can prepare us for future catastrophes. This cookbook of ideas rethinks our eating habits and traditions, challenges our food taboos, and proposes new recipes for humanity’s survival.

These more than sixty projects propose new ways to think and make food, offering tools for creative action rather than traditional recipes. They imagine modifying the human body to digest cellulose, turning plastic into food, tasting smog, extracting spices and medicines from sewage, and growing meat in the lab. They investigate provocative possibilities: What if we made cheese using human bacteria, enabled human photosynthesis through symbiosis with algae, and brought back extinct species in order to eat them? The projects are diverse in their creative approaches and their agendas—multilayered, multifaceted, hybrid, and cross-pollinated. The Anthropocene Cookbook offers a survival guide for a future gone rogue, a road map to our edible futures.

Zane Cerpina is a curator and writer working within experimental and digital arts.

Stahl Stenslie is a curator and researcher specializing in experimental and emerging aesthetics, and disruptive technologies who has held positions at Academy of Media Arts Cologne, Oslo National Academy of the Arts, and Aalborg University.

Included in Dezeen's top 11 architecture and design books of 2022


“By turns enlightening and profound, difficult and preposterous, Cerpina and Stenslie’s account is an impassioned call for ‘visionary thinking’ and dismantling food taboos. Climate-concerned cooks with an open mind will find much to chew on in this surprising culinary tour.”
—Publishers Weekly

“Cerpina and Stenslie don’t think humans should shy away from creative solutions to our food problems. To that end, they hope the book reaches as many eaters as possible, and fast. They began writing it six years ago, and since then, a host of catastrophes—COVID-19, massive forest fires, and wheat shortages caused by the war in Ukraine among them—have exacerbated their sense of urgency. But they remain optimistic. Even as things may seem to get worse, Cerpina says, “we are likely to thrive if our imagination is able to take the challenge.”
—Atlas Obscura

“If you are looking for solutions to the great problems of mankind, you will probably not expect them to be found in a cookbook. But that is exactly what The Anthropocene Cookbook wants: to provide answers to the question of how humans can deal with impending catastrophes such as food shortages and the loss of species.”
—DER SPIEGEL

"Cerpina and Stenslie's anthology confronts the idea that the Anthropocene era — the time during which humans have had a substantial impact on the Earth's environment — entails a radical reassessment of what we eat, and how...The Anthropocene Cookbook's chapters traverse topics such as alternative approaches to food security, new potentially edible ingredients and the culinary possibilities offered by the human body. Cerpina and Stenslie — who independently are both artists, curators and researchers — embarked on the book to try to provoke creative thinking about the existential challenges facing humanity."
—Dezeen