The Autobiography of a Transgender Scientist (Hardcover) 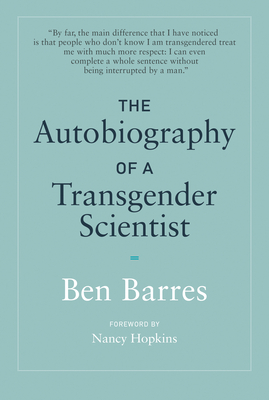 By Ben Barres, Nancy Hopkins (Foreword by)
$21.95
On Our Shelves Now. Call store for up-to-the-minute availability.

A leading scientist describes his life, his gender transition, his scientific work, and his advocacy for gender equality in science.

Ben Barres was known for his groundbreaking scientific work and for his groundbreaking advocacy for gender equality in science. In this book, completed shortly before his death from pancreatic cancer in December 2017, Barres (born in 1954) describes a life full of remarkable accomplishments--from his childhood as a precocious math and science whiz to his experiences as a female student at MIT in the 1970s to his female-to-male transition in his forties, to his scientific work and role as teacher and mentor at Stanford.

Barres recounts his early life--his interest in science, first manifested as a fascination with the mad scientist in Superman; his academic successes; and his gender confusion. Barres felt even as a very young child that he was assigned the wrong gender. After years of being acutely uncomfortable in his own skin, Barres transitioned from female to male. He reports he felt nothing but relief on becoming his true self. He was proud to be a role model for transgender scientists.

As an undergraduate at MIT, Barres experienced discrimination, but it was after transitioning that he realized how differently male and female scientists are treated. He became an advocate for gender equality in science, and later in life responded pointedly to Larry Summers's speculation that women were innately unsuited to be scientists. Privileged white men, Barres writes, "miss the basic point that in the face of negative stereotyping, talented women will not be recognized." At Stanford, Barres made important discoveries about glia, the most numerous cells in the brain, and he describes some of his work. "The most rewarding part of his job," however, was mentoring young scientists. That, and his advocacy for women and transgender scientists, ensures his legacy.